Web3: The Future of Decentralized Internet?

You are here:
Web Design 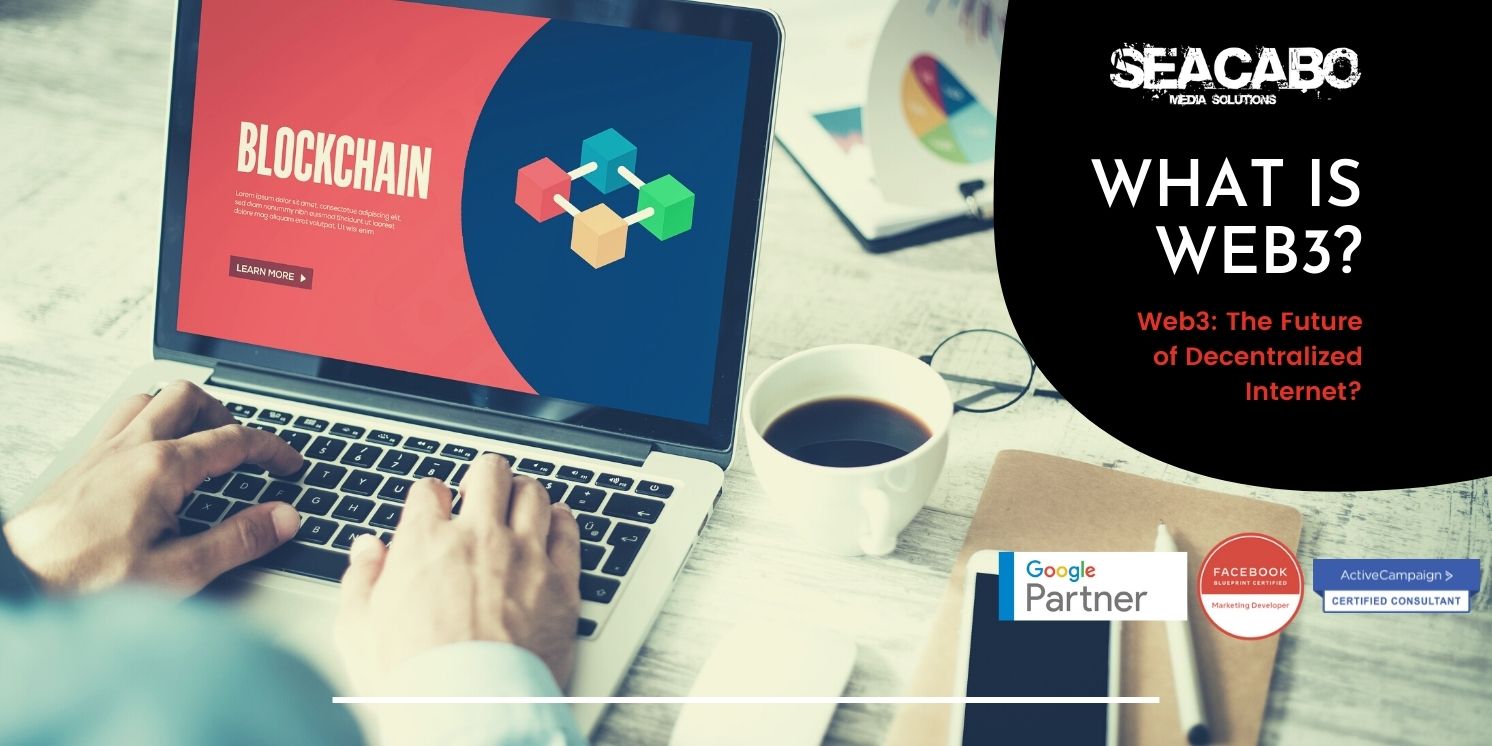 A new buzzword has recently grown popular among tech, crypto, and venture capitalists. If you’re into cryptocurrencies, NFTs, or even just keeping up with the newest tech headlines, you’ve probably heard about Web3. It’s a popular topic in today’s tech industry, and debates about it are becoming common. It is even said that web3 is the future of decentralized internet.
Now, you might be wondering what all the fuss is about and why this topic is so popular. This article will provide you with all of the information you need on web3.

Web3 is a proposed new version of the internet that is designed from decentralized blockchain systems, which are the shared ledger systems that use tokens, cryptocurrencies, and NFTs for more control and ownership of the users.

Web3 has now become an overall word for everything related to the future generation of the internet becoming a decentralized digital infrastructure that allows anybody to join and participate without having their personal data monetized.

What Exactly Is a Decentralized Web?

Today, the framework that many of the websites we mostly visit online is mainly owned by companies and governed by government rules. It is mostly a network infrastructure that has paid workers and professionals that are working to install, develop, monitor, maintain, and manage servers, websites, and software that we want to access through the internet. If you notice, these websites or platforms that we frequently visit online will either charge us a fee or need us to follow specific rules for us to use and enjoy their platform. For example, in order for you to use and enjoy Facebook, you must first follow their rule of signing up with them and providing personal information. If you also want to avail their services such as promoting ads, you must pay a certain fee. In other words, you have to follow their rules or pay them for you to take advantage of their framework. As a result, the current web is suffering from less privacy, freedom, limited user experience, surveillance from the authorities, and centralized control monopolies.

The goal of the Decentralized Web is to eliminate restrictions and promote independence and greater freedom in the use of any platform or website that is not governed by corporations or the government. The term “Decentralized Web” refers to a set of technologies that replace or enhance existing communication protocols, networks, and services, and redistribute them in a form that is resistant to control or censorship.

With that being said, Web3 aspires to be the decentralized Web.

Many people view the internet we have today as a constant cornerstone of modern civilization that was created and has remained to be the same from the time it was created. Nevertheless, the current internet that we know is not what was originally envisioned. The Internet was created in the 1960s as a means for government researchers to communicate information. In the 1960s, computers were enormous and stationary, and accessing information stored on them required either traveling to the machine’s location or having magnetized computer tapes, similar to cassettes, transported through the mail system.

After several years of research, development, and updates, the internet was formally launched for public use on January 1, 1983.

The brief history of the internet we know today has been divided into two distinct periods: web 1.0 and web 2.0.

Web 1.0 mostly consisted of static websites controlled by companies and businesses, with little to no interaction between users. There are rarely producing engagement content and materials, earning it the version of “read-only web.” You can view and read content on the website, but there is no way for you to change it, engage with other users, or interact with them.

The applications in Web 1.0 only include:

Our web design focuses on driving visitors to your website and turning them into customers. We combine best-in-class design and user-friendly functionality with a SEO kick-start that communicates the necessary information to Google that will increase your search ranking and visibility.

With the introduction of social media platforms in 2004, the Web 2.0 era began. It’s a version of the internet that most of us are familiar with today. Similar to Web 1.0, Web 2.0 is a version of the internet that is still controlled and dominated by companies. However, Web 2.0 companies offer their services in exchange for your personal information or even charge you a fee. That’s why with every website you visit, you have to share your personal information and data for you to register and have an account with them or even pay a certain amount.

The internet progressed from being read-only in Web 1.0 to being read-write in Web 2.0. Companies began to provide platforms for users to contribute user-generated content and engage in user-to-user interactions, rather than supplying read-only content to users.

Web 2.0 was also where the advertising-driven business model was born. As more and more individuals went online, several top corporations started to control a substantial portion of the internet’s traffic and value. They were able to own it and profit from it. Examples of these are Facebook, Google, Amazon, and more.

Most applications in Web 2.0 revolved around these apps:

Web 3.0 is a term coined by New York Times reporter John Markoff in 2006 to describe a new version of the Web that should incorporate specific breakthroughs and activities on the internet. However, Berners-Lee had openly discussed several of these essential notions in the 1990s.

Web 3.0 is supposed to be the next version or era in the evolution of the internet. It has the potential to be as revolutionary and paradigm-shifting as Web 2.0 with the main concepts of decentralization, more transparency, and improved user utility. Although Web 3.0 is not yet an official version of the internet, it is gaining popularity due to its primary goal of decentralization, openness, and greater user utility, as well as the loss of personal data monetization.

The Birth of Web3

In 2014, Gavin Wood, a co-founder of the Ethereum cryptocurrency, designed and coined the term Web3. It refers to blockchain-based decentralized applications without your personal information being shared and monetized. Today, Web3 is seen by many as the ultimate step in the evolution of the internet and, possibly, the organization of modern society. Web 1.0 was the period of decentralized, open protocols when the majority of internet activity consisted of visiting individual static, read-only webpages.

As many people believed that Web 2.0 is the period of centralization, in which a large portion of communication and commerce takes place on closed platforms controlled by a small number of mega businesses such as Google, Facebook, and Amazon and subjected to the notional supervision of centralized government authorities, Web3 is meant to liberate the world from monopolistic domination.

The main application featured on Web3 currently are:

The Promising Key Features of Web3

While defining Web3 is still difficult because of its current development process, there are a few guiding concepts that govern its development.

When Did People Suddenly Start Talking About Web3?

People in today’s fast-paced modern society are afraid of missing out on the next big thing. There is no doubt that cryptocurrency is one of the biggest things in today’s modern society. Over the last several years, thousands of virtual currencies have appeared and many are regulated. Many people, young and old, are already involved in crypto. According to Insider Intelligence, there are 34 million people in the United States who own cryptocurrency. Can you imagine how many individuals throughout the world hold cryptocurrency?

The Role of Non-fungible Tokens (NFTs)

The hype about Web3 is becoming more widespread and many big tech businesses are taking notice. Another factor for the growth of the Web3 movement was the introduction of non-fungible tokens (NFTs), or digital collectibles and other online items and files that may be purchased and traded using crypto tokens. With Web3, user experience in trading and buying these tokens will be easier, safer, and even more fun.

With how big cryptocurrencies are, they will play a critical role in the internet’s future. A Web3 application that runs on a specific blockchain and uses specific crypto could be a great example of why many people are now talking about Web3. It is the hype of crypto and how Web3 is marketed. Even with the hype, Web3’s potential is undoubtedly tremendous.

WHILE YOU'RE HERE
ARTICLE CONTINUES
More Advantages of Web3

Web3 is a new and quickly growing innovation that has the potential to revolutionize the way we use the Internet. Although its maximum capabilities will take some time to materialize, here are some observed about Web3’s distinctive advantages:

Will Web3 Become the Standard and the Future?

With how crypto is thriving and its success in this modern world, blockchain-based social networks, online transactions, and online businesses have a better chance to expand and prosper in the coming years. Large corporations, like Facebook, Twitter, or Google, can nevertheless provide significant value as a social network despite not being blockchain due to their large user bases and their influence. As a result, predicting that Web3 will become the norm and the internet’s future can be a challenge. However, many individuals are aware that a decentralized Internet provides more benefits in today’s society. That’s why Web3’s mission is to be the internet of the future, giving users more freedom and privacy while online.

Web3 was born out of the Ethereum blockchain and refers to decentralized apps that run on the blockchain. It is now continuing its incredible growth.

Web3 has a lot of promise in the decentralized Internet because of its key values. Even average people will embrace Web3 and its mission as more and more people discover the benefits and advantages of a decentralized web. For the time being, it is difficult to say that Web3 will take over the internet; we must wait and see what happens. However, given the success and rise of crypto, blockchain, and leveling up of the advocacy of many people towards decentralized internet, we cannot deny that Web3 has the potential to be the internet’s future.