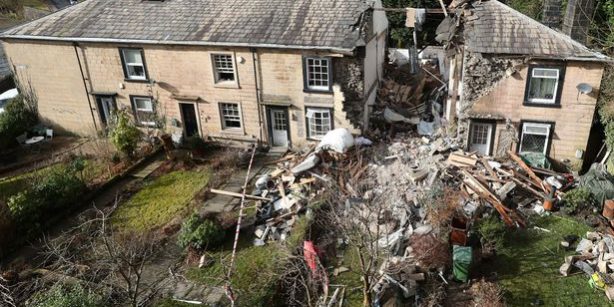 A woman killed when a suspected gas blast reduced a stone cottage to rubble has been a video call with friends at the time, a neighbour claims.

Dozens of nearby residents fled after the explosion destroyed the terraced home in a quiet village.

Emergency teams who raced to the scene found the body of a 61-year-old woman in the debris.

A mum and her young daughter, aged seven, who lived next door, together with their shih tzu dog, were helped to safety by a neighbour.

Kerry Crompton, 36, who lives nearby, found them in their doorway.

She said: “I was watching TV when I heard the explosion.

“I went outside and there was smoke everywhere.

“I ran down the street and could hear screaming coming from next door.

“I saw Stephanie and her daughter, Evie, and dragged her out.

“Evie was hysterical because she was upset that she had lost all her toys.

“I just grabbed them both and Besti the dog and got them out of the house.”

The mum and daughter were taken to hospital but were later discharged.

Kerry, a specialist nurse, who said she could smell gas, added: “They were both absolute black.

“Stephanie was screaming. I think she was completely disorientated.”

Kerry said she had heard the woman who died in the explosion, named locally as Hazel, had been speaking to friends via an internet call at the time of the blast.

“I’ve been told that at the time of the explosion, she was in the living room on a video call to her friends” she said.

The house, which was one of five in a terraced row in the picturesque village of Summerseat, in the Ramsbottom district of Bury, Greater Manchester, collapsed to the ground after the explosion At 9.30pm on Wednesday.

Mattresses and furniture, together with building materials, spilled out onto the front garden.

Homes on either side had slates and stone bricks torn off.

A strong smell of gas was reported in the area today and the supply was isolated as a precaution.

Police Chief Insp Jamie Collins said: “Approximately 30 surrounding houses were initially evacuated to ensure the safety of those residents but most have now safely returned to their homes, with only those living on the immediate street still evacuated as a precaution.

“We are keeping an open mind in regards to the circumstances of this incident and inquiries are ongoing.”

Floral tributes to the victim were left near the scene today.

Gavin Jones, who lives nearby, said: “Seeing a house blown out is a scary situation. A lot of people were confused, there was quite a lot of panic.”

He said: “There was a massive boom and the doors and windows just shook. The shockwaves just hit the house.”

He added: “You could smell gas. We just had a few minutes to gather some clothes before we were evacuated.”

The community has set up a Facebook appeal to help raise £5,000 for those who have lost possessions.