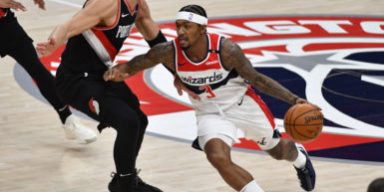 The Washington Wizards failed to build on their previous win and lost once again last night. They fell to the Portland Trail Blazers despite a phenomenal 37-point performance from their star Bradley Beal.

Since the start of the season, he has been their sole consistent player and has broken multiple scoring records in this process. After last night’s performance, he became the first player since Michael Jordan in 1988-89, to score at least 25 points in his first 16 games of the season. He shot an efficient 14-24 from the field, including 6-12 from three.

But unlike MJ, Beal has been unable to win games. He has proved he is one of the best scorers in the league, but he isn’t able to win games for the team. His one-dimensional ability might be one reason, but the rest of the team not supporting him is also why they fall short.

Should Bradley Beal continue to stay in Washington?

But like with most of the games this season, Beal’s scoring has never been enough. The Wizards have been one of the best offensive teams led by his scoring. They rank third when it comes to points scored per game, but when it comes to defense, they are rock bottom. They are 3oth in points allowed per game, which is embarrassing.

Their record is 4-13 now, which is the worst in the entire league. Despite this mess, Beal wants to stay with the Wizards. He has expressed his frustration often this season. When he was asked, “Are you frustrated?” following a loss a few days back, he just replied, “Is the sky blue?”

He is frustrated because of the team’s performance, and not because he isn’t able to leave. The owners are ready to move him if he wants to leave. But in a time when loyalty doesn’t matter anymore, Beal wants to faithful to the Wizards. He wants to stay and make the team competitive and at least be in the playoff hunt.

The Wizards need to work a lot if they want to qualify for the playoffs. Beal needs to improve defensively while the rest of the team needs to support him. They have a good team on paper, but they need to show up when it matters.

Get notified about breaking news and watch highlights on the go; join the Arena on NBA Hoops