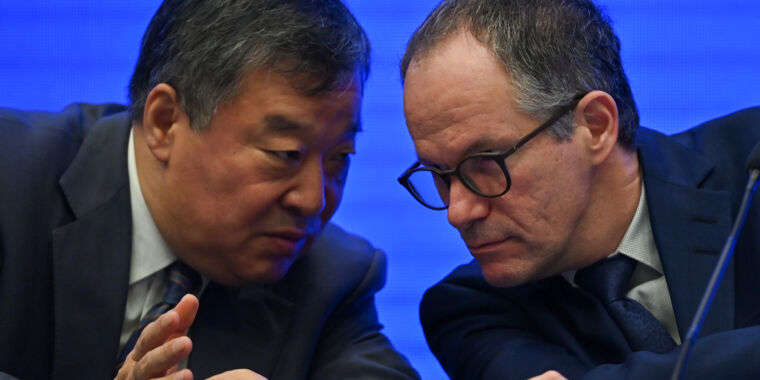 After 12 days of field work in Wuhan, China, an international team of scientists assembled by the World Health Organization have wrapped up its investigation into the origins of the SARS-CoV-2 virus that mushroomed out of the city in December of 2019.

The team’s findings support researchers’ previous leading hypothesis of how the pandemic began—that the virus used a still-elusive intermediate animal host as a bridge to infect humans from a distant reservoir host, such as horseshoe bats. But the team did fill in new, intriguing details of the pandemic’s first, crucial month—and ruled out sensational theories that the pandemic was born from a laboratory incident.

“Our initial findings suggest that the introduction [to humans] through an intermediary host species is the most likely pathway,” Peter Ben Embarek, WHO International Team Lead, said in a 3-hour press conference on the team’s findings, livestreamed from Wuhan on February 9. Though researchers in China have already surveyed 11,000 animals around the country in search of that host, all have tested negative for SARS-CoV-2 so far, the team noted. Identifying the intermediary host “will require more studies and more specific, targeted research,” Embarek added.

The possibility that SARS-CoV-2 was released from a laboratory—as either a purposefully engineered virus or a naturally occurring virus being studied—was deemed “extremely unlikely,” Embarek added. The team came to that conclusion after conducting an objective, standardized assessment, which drew upon scientific literature, interviews with local researchers, and a visit to local labs, including the coronavirus lab at the Wuhan Institute of Virology, which has been a frequent target of conspiracy theories.

“Yes, [lab] accidents do happen,” Embarek noted, “of course, this is not impossible.” But accidents are also rare, and there is still no evidence that SARS-CoV-2 was ever-present in any lab—at the WIV or elsewhere—prior to the start of the pandemic, he noted.

There has been speculation over the similarities of a bat coronavirus present in the WIV lab, called RaTG13, which is a relative of SARS-CoV-2—but a distant one. Lead WIV coronavirus researcher, Shi Zhengli, has noted that it diverged from an ancestor of SARS-CoV-2 between 20 and 70 years ago. Moreover, WIV researchers never grew that virus in the lab, making an accidental leak highly unlikely. International geneticists, meanwhile, have also pointed out that there are no telltale signs of human tinkering in the SARS-CoV-2 genome, weakening any lab origin hypotheses involving an engineered virus. Last, upon visiting the WIV and seeing how research is conducted in its top-security lab, the WHO team judged it “very unlikely that anything could escape from such a place,” Embarek said.

Instead of a lab leak, the team said it found the textbook beginnings of a new disease. “The picture we see is a very classical picture of the start of an emerging outbreak,” Embarek said, “where we start with a few sporadic cases early on in the month of December and then we start to see small outbreaks where the disease starts to spread in clusters.”

Back to the beginning

Though the overall picture didn’t change much from scientists’ previous hypothesis, the investigation filled in new details of what happened in December 2019. The WHO team—composed of 10 international scientists and five WHO experts, including Embarek—spent its time in Wuhan making trips around the city. In addition to visiting WIV, the team visited the hospital where the first COVID-19 patients were treated, interviewed doctors, patients, and went to Huanan seafood market, where many early cases were linked.

The WHO team collected epidemiological data—carefully mapping out the timelines and locations of the earliest cases of COVID-19 known around the city and even inside the market—as well as molecular and genetic findings, and data on animal and environmental sampling.

In all, the investigators settled on exploring four main hypotheses:

Hypothesis 3 would require direct transmission to a human from an infected reservoir animal, such as horseshoe bats or perhaps a pangolin. Both animals have been found carrying viruses genetically related to SARS-CoV-2, and horseshoe bats are well-known for carrying diverse populations of coronaviruses. But, given that Wuhan lacks bat populations, the researchers deemed it unlikely that a direct transmission from such an animal as a bat was the spark that set off the roaring pandemic.

Instead, they think it more likely that the virus jumped to an intermediate animal species that had more regular contact with humans, giving the virus plenty of opportunities to evolve to infect humans and then spread among them. This is how other infamous coronaviruses—including SARS-CoV, the cause of SARS—spread to people. Since SARS-CoV-2 emerged, it’s become clear that it several animal species are highly susceptible to the virus, including mink and cats.

“Generally speaking, a virus causing a global pandemic must be highly adapted to human environments,” Dr. Liang Wannian, Chinese team lead and executive vice dean of school of public health at Tsinghua, said in today’s press conference via an interpreter. “Such adaptations may occur suddenly or may have evolved through multiple steps, with each step driven by natural selection.”

The WHO team is now keenly interested in further studies looking into the animals and animal products that are commonly moved into and out of Wuhan—including frozen ones.

When the pandemic came to light in the second half of December, authorities in Wuhan initially linked the outbreak to the Huanan seafood market. The market primarily sold frozen foods, which were mostly frozen seafood, but it also farmed wild animals and their products. Many humans who fell ill were workers or visitors of the market; some were linked to other, similar markets in the city.

But, soon after, researchers noted that there were cases earlier in December, which had no clear link to any of the markets. This suggests that markets may have simply been places where the virus easily spread, not necessarily where it first emerged.

Still, Chinese data included in the WHO investigation found that right at the time the Huanan seafood market was shut down at the end of December, surfaces in the market were extensively contaminated with SARS-CoV-2. With such widespread contamination, researchers say all the possibilities of how the virus could have arrived are on the table. The virus could have been introduced to the market from an infected person (or people), from infected live animals, or from frozen contaminated products or packaging.

Despite not knowing the source, the investigators were able to map all the initial cases throughout December, combining that case-location mapping at some of the markets—and even different parts of the markets—with genetic sequences of the virus. “We could see that picture becoming more and more clear of spread within the market and outside the markets,” Embarek said. While some of the genetic sequences linked to the market were identical—suggesting clusters of infections—others in the city had variations, suggesting the virus had been moving around.

About those frozen foods

So far, animal-product samples collected from the market have tested negative, but Chinese officials homed into the hypothesis that the virus arrived on frozen foods. Several investigations in China have found SARS-CoV-2 lurking on frozen imports, and data suggests the virus can easily survive cold temperatures. Experts are still skeptical that frozen packaging and foods pose a significant transmission risk. However, reports from China were enough to prompt the New Zealand government in August to probe frozen freight in the wake of an unexplained outbreak in Auckland.

Chinese officials, meanwhile, continue to highlight the potential risk of frozen freight. The possibility that the virus arrived in Wuhan frozen means there’s a chance that the virus did not originate in China but was, instead, shipped into Wuhan on from a different country.

Though Embarek acknowledged that the Huanan seafood market did have imported products, he seemed more focused on directing future studies into the domestic animals and products that were trafficked through the market and elsewhere in Wuhan. Some initial trace-back studies showed that some of the animals originated on farms in areas with bat populations, Embarek noted.

However SARS-CoV-2 arrived in Wuhan, the data reviewed so far suggests researchers have a clear of idea ­when it arrived. The earliest cases identified still fit into December. None of the data the WHO team looked into suggested cases had popped up earlier in Wuhan or any other part of China. The investigators sifted through archived clinical samples, blood draws, hospital records, death records, and sales figures for over-the-counter cold medicines to come to the conclusion.

Moving forward, the WHO team laid out a set of recommendations to continue work to find the source of the pandemic.

Future research needs to continue to connect “the dots and connect the different piece of information to try to get a better understanding of this whole picture,” Embarek said. And we need to do this while, again “not limiting ourselves to any preconceived ideas and just following all the leads, following the science, following well designed and conducted studies.”