‘We were accused of murdering our own son 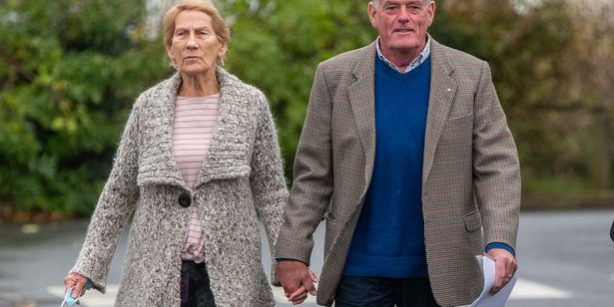 The elderly couple arrested over the disappearance of their son 29 years ago went through “hell” after being arrested on suspicion of his murder.

His parents Doris and Charles Clark were arrested and questioned in September as part of a murder probe following a cold case review.

Now released without charge, they told how Doris had been accused of murdering Steven, while Charles was quizzed about burying him in the back garden of their home.

She told the Mirror: “We were never guilty, ever, ever, or ever going to be. But it was a big turn of events for the police.

“They never communicated with us at all, we just had to get out of the house, and that was it.

“We knew they were going to search the house but then we had to leave for four and a half days. We were then held for quite a few hours in different cells.”

She added: “To solve the mystery of what happened to Steven would be the most wonderful thing ever.

“We really cannot answer questions about his disappearance because we just don’t know anything.

“Sometimes we thought ‘have aliens come down to snatch him up?’ There is no answer to anything we ask. It is a horrendous mystery.

“It has changed our lives completely, it is just the strangest thing ever.

“It is as though someone has whisked him away – your mind runs riot about what could have happened, because there are so many unpleasant people in the world.”

Doris reported Steven missing after he went into a public toilet in Saltburn, N Yorks on Dec 28, 1992, while she was in the ladies. She waited outside for him, but he did not emerge.

She returned to their home in Marske three miles away to wait for him, and reported him missing when he failed to return.

A witness has since come forward to say she saw Steven near his home after the time that he went missing.

The Clarks say there is no evidence of their son being murdered.

Cleveland Police believe he has ‘come to harm’ because there has been no sign of life since his disappearance.

Charles, 78, like his wife, a former police officer, said they were ‘ignored’ for 17 weeks after they were questioned.

But it was not, and it was horrible.”

Doris compared their situation to that of the family of Claudia Lawrence, the chef who went missing in York in 2009. Her father Peter died this week, never knowing what happened to her.

“Mr Lawrence thought she had been murdered, but they don’t know. Nobody knows any more about her than we do about Steven,” added Doris.

“Sadly her father died without ever finding out what happened to her. We have never declared Steven dead, because then there would not have been any more inquiries whatsoever. And we didn’t want that.

“After all this time, we still have that scrap of hope, it keeps you going. Of all the people to just disappear like that it had to be Steven.”

“They have dug everything up in the garden. They moved the shed. Why pick on us?

The Clarks are to appear in an ITV documentary about Steven’s case in a bid to help find him.

Charles also told the BBC that people in Marske had stood by them following their arrest as they ‘believe we are innocent’.

Steven’s body has never been found.

Cleveland Police declined to comment, but stressed the investigation is ongoing.

Det Ch Insp Shaun Page, who is leading the inquiry, said this week: “We are continuing to investigate Steven’s disappearance and people can continue to contact us with information.

“There is no proof of life and we believe Steven has come to serious harm.

“The case continues to be classified as one of suspected murder.”

Steven was left with disabilities following a road accident when he was two, including a severely damaged left arm, a damaged leg and pronounced limp.

At the time of his disappearance he was attending the Rathbone Society in Redcar which helped people with disabilities find employment.

The Steven Clark mystery …what could have happened to him

Accident: He vanished on Dec 28., 1992, without his wallet, specs or cash. If he was in an accident outside of the area – especially after a passage of time – it may have been difficult to identify him. But he was reported as a missing person with a full description given to police within hours of going missing.

Suicide: The tide was out at Saltburn at the time he went missing. If he had taken his own life by throwing himself into the North Sea, police believe that his body would have been found, with extensive checks having been done both at home and abroad.

Kidnap: Could he have been snatched? He was vulnerable due to his disabilities and walked with a pronounced limp. There is the possibility of a robbery or mugging going wrong.

Murder: On Sept 24, 1999, Cleveland Police received an anonymous handwritten letter which named Steven’s ‘killer’. It was posted to Guisborough Police Station. After the Mirror published excerpts last year, the letter writer came forward. Det Chief Insp Shaun Page said: “For 20 years we have been in possession of this handwritten anonymous letter and now, for the first time, we have been able to speak to the author. This marks another significant moment which has included new sightings of Steven on the day of his murder and a wealth of new material being uncovered.”

A ‘new life’ alone: There were sightings in the days after he disappeared, in a bar not far from his home in Marske, but they were never confirmed despite extensive police inquiries in the area and in Reading, Berks., where he lived after his family returned to the UK from South Africa when he was 20.