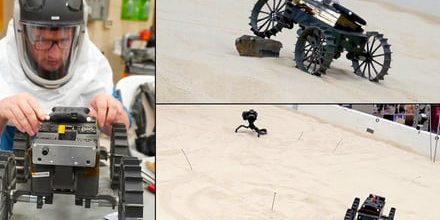 NASA’s Perseverance rover, which is currently trundling across the surface of Mars, is about the size of a small car.

But recently the space agency has turned its attention to developing a smaller, shoebox-sized rover that it plans to send to the moon on an upcoming Artemis mission.

As the project name suggests, the idea is to deploy a squad of these small rovers, each one powered by software that would enable them to work together. Tasks could include mapping unexplored parts of the lunar surface in 3D using an onboard stereo camera, with multiple rovers able to complete the job far more quickly than a larger, single rover performing the same activity. NASA isn’t giving up on the larger rover design, however, pointing out that both types are useful for different kinds of tasks.

JPL recently tested a squad of the small rovers on simulated lunar soils at NASA Glenn’s SLOPE (Simulated Lunar Operations) laboratory as they work on designing a vehicle that can comfortably handle hard-to-reach places such as craters and caves. You can watch the rover in action in the video below.

“We tested the traction of the wheels in different conditions,” said Alex Schepelmann, lead roboticist for SLOPE at NASA Glenn.

“The rover wheels were also tested to see if they could negotiate large lunar rocks and climb the slopes of our tilt beds that simulate the hills of the moon’s surface.”

The SLOPE team also used scientific imaging equipment to work out how much wheel slip occurred in the simulated lunar soil. Too much slippage and it could prevent the rover from accurately identifying its location as it attempts to follow a route across the lunar surface.

“If the wheel slips, the rover might think it has gone farther than it has actually traveled, since GPS technology isn’t yet developed for the moon,” Schepelmann explained. To track positioning, the CADRE software will utilize data from an inertial measurement unit, a stereo camera, and a sun sensor.

The current plan is to send a CADRE rover to the moon as a technology demonstration on a commercial robotic lander within the next five years as part of NASA’s Commercial Lunar Payload Services initiative.

NASA is also planning to send several other rovers to the moon in the coming years. VIPER, which is about the size of a golf cart and features spoked wheels similar to those on the CADRE rover, will explore the lunar surface in search of ice and other resources as early as 2023.

The space agency also wants to send a newly designed human-operated moon buggy for the next astronaut mission to the moon, which is currently scheduled for 2024, though this date looks likely to slip.