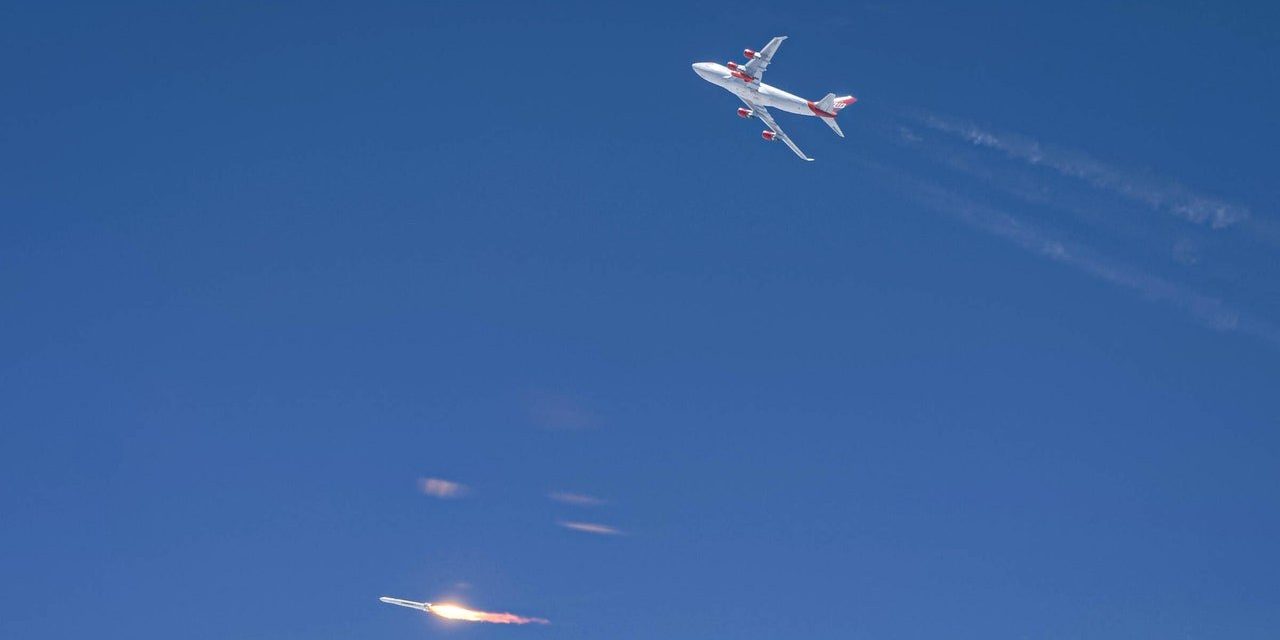 On Monday afternoon, a Boeing 747 with a bright red tail emblazoned with “VIRGIN” departed from Mojave Air and Space Port in California. Tucked under its port-side wing was LauncherOne, a liquid-fueled rocket loaded with a dummy payload. The plane—known as Cosmic Girl—was headed for a patch of airspace over the Pacific just off the California coast near Catalina Island; LauncherOne was bound for low earth orbit. Once Cosmic Girl was in position, pilot Kelly Latimer pulled back on the throttle and took the 747 into a steep climb and released the rocket. After a few seconds of free fall, LauncherOne ignited its engines—and that’s when things went wrong.

Everything you need to know about Blue Origin, SpaceX, Virgin Galactic, and what actually happens to your body if you go live in space.

“We had a good ignition, but after a couple seconds of stable flight, the rocket basically shut itself down, ending the mission,” Virgin Orbit communications officer Kendall Russell wrote in an email to WIRED. “We don’t know all the details. Things will become more clear as the team continues their investigation into the source of the anomaly.”

This was Virgin Orbit’s first test of its air-launch rocket system, which the company developed to boost small satellites into space. According to Russell, the plan was to test the rocket by sending a “nice-looking inert mass” into space to do a full test of the system before Virgin began launching customers’ satellites. This is par for the course in the aerospace industry, which typically christens its new launch vehicles by lifting so-called boilerplate spacecraft into orbit. These spacecraft aren’t meant to do anything other than simulate a real payload—they’re typically just hunks of steel, concrete, or, in SpaceX’s case, a Tesla Roadster.

But if launching boilerplate spacecraft on a maiden mission is an aerospace tradition, so is failure. As SpaceX founder and CEO Elon Musk pointed out on Twitter after Virgin Orbit’s terminated launch, it took SpaceX four tries before its first rocket, Falcon 1, made it to orbit. And despite a proliferation of US rocket startups, only two—SpaceX and Rocket Lab—have made it to low earth orbit.

Virgin Orbit isn’t the first company to develop an air-launch rocket system. Pegasus, a rocket operated by Northrop Grumman, has been launching satellites from the belly of a plane since the early 1990s. One of the main differences between Pegasus and Virgin Orbit’s LauncherOne is that Pegasus uses a solid rocket motor rather than a liquid engine, which makes it less complex and less prone to failure. But this comes with trade-offs on safety, says Will Pomerantz, Virgin Orbit’s vice president of special projects and the company’s first employee.

“The downside of a solid rocket motor is that once you light the candle, it keeps going and you can’t really turn it off, shy of blowing it up,” Pomerantz told WIRED before the launch. “If things are going wrong with a liquid rocket engine, you can just stop feeding fuel to the engine and it stops powering.” In this sense, Virgin Orbit’s launch failure went exactly as planned—once an anomaly was detected on the rocket, it automatically killed its engines.

Russell says that the company has mostly put together its second rocket at its factory in Long Beach, California. It’s too early to say when the company will try again, but Virgin Orbit is aiming for a relatively fast turnaround. “Typically, launch companies will take about a year to go from their first flight to their second,” Russell wrote by email. “We still need to fully digest the data to understand what modifications need to be made to the system. But we decided to do as much work in advance as possible, which means we can move at a much faster pace.”