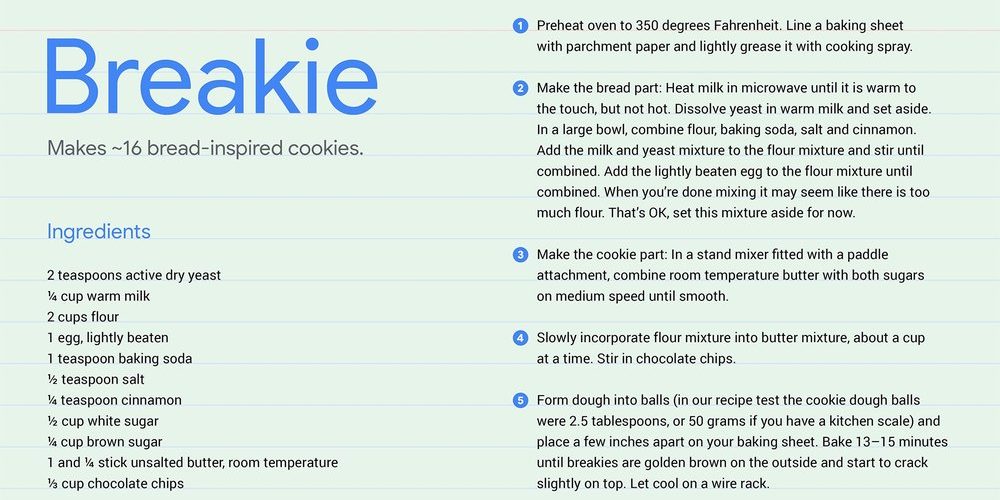 The folks at Google used the power of AI to create a cakie (cake/cookie) and a breakie (bread/cookie) recipe.

We started off by collecting hundreds of cookie, cake and bread recipes. Then we converted all of their ingredients to ounces and whittled them down to a few essential ingredients (yeast, flour, sugar, eggs, butter and a few other things). Next we did a bit of reorganizing, since according to Paul Hollywood, treats like banana, zucchini and pumpkin bread are really more cake than they are bread.

Then we used a Google Cloud tool called AutoML Tables to build a machine learning model that analyzed a recipe’s ingredient amounts and predicted whether it was a recipe for cookies, cake or bread.

This seems like an awful lot of work when they could’ve just used my personal recipe for a cakie: buy a cake, buy a cookie, and then eat them both at the same time. I don’t have a breakie recipe, because why would you eat bread when you can eat cake?

Keep going for the recipes and a video of their results and check out their blog post describing the project here.

Quarantine does weird things to people, and in the case of engineer Ethan Rosenthal it made him develop a system for optimizing a peanut butter and banana…

Hamburger Cake Suitable For All Meals

Well, we ended yesterday with the BA-K-47, and now we’re kicking Wednesday off right with a hamburger (technically a cheeseburger) cake. In case you couldn’t tell, or…

This is probably the best looking cake we’ve posted here on Geekologie, and it comes to us all thanks to loyal Geekologie Reader, Jay, who had this…