US sees jump in vaccinations amid devastating delta surge 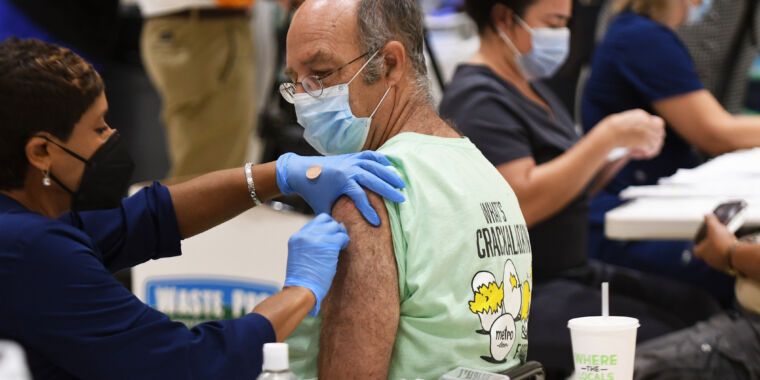 The US reached a milestone of having 200 million people vaccinated with at least one dose of a COVID-19 vaccine on Friday. And for two days in a row now, over one million people rolled up their sleeves for a shot. Those are daily highs not seen in nearly seven weeks.

Of those one million vaccinations each day, approximately 562,000 and 534,000 shots went to people receiving their first dose, according to White House COVID-19 Data Director, Cyrus Shahpar. Earlier this week, the seven-day average of new first doses nationwide has been hovering around 400,000, according to the Centers for Disease Control and Prevention.

The boost in vaccinations comes amid a devastating wave of COVID-19 cases, hospitalizations, and deaths driven by the hypertransmissible delta variant, which now accounts for nearly all cases in the US. The surge stands to rival the country’s worst wave of the pandemic, which peaked in January 2021 with average daily new cases around 200,000. The country is now averaging over 130,000 cases a day, and that figure is still climbing.

Hospitalizations and deaths are also on the rise. In the past two weeks, hospitalizations have increased 53 percent and deaths have increased 108 percent, according to data tracking by the New York Times. Hospitals in several states are reaching capacity and, in some cases, running out of beds in intensive care units. The country recorded around 1,000 deaths each day in the last two days. With highly effective vaccines widely available for free to all people over the age of 12, nearly all deaths are entirely preventable.

The surge in disease appears to be boosting vaccination in some places. As White House COVID-⁠19 Response Coordinator Jeff Zients noted last week, some of the states with the highest case rates are seeing some of the biggest gains in vaccination. In the past month, the average number of doses administered each day has tripled in Arkansas and quadrupled in Louisiana, Alabama, and Mississippi.

Generally, the more people protected by vaccines the better, however, the jump in shots is unlikely to spare the country from the worst of the current surge. It takes five to six weeks for vaccination to provide full protection. Other mitigation efforts—such as the tried and true measures of mask wearing, crowd avoidance, and good ventilation—can drag down the current trend. That said, health experts say that the extra protection from vaccinations now will help as we head into fall, a new school year, and colder weather, all of which can spur increases in transmission.