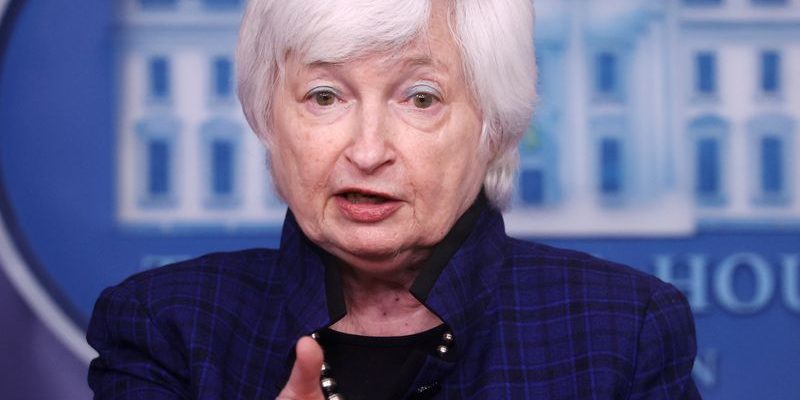 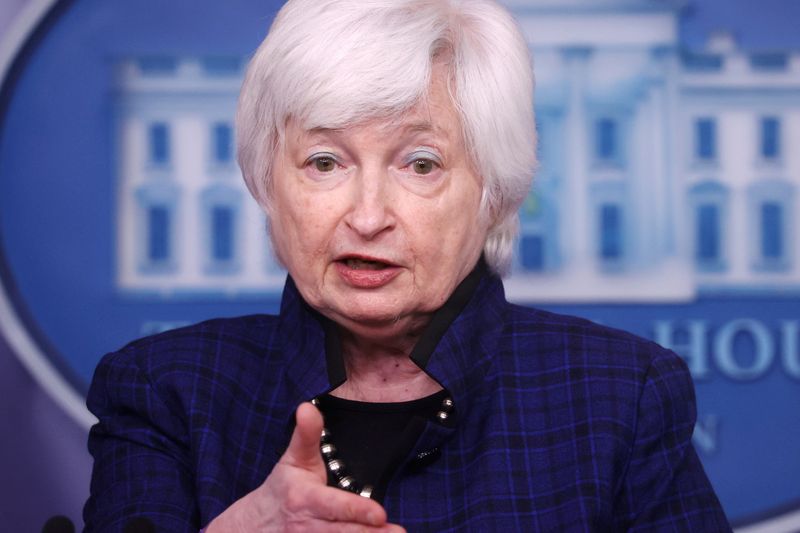 WASHINGTON (Reuters) -U.S. Treasury Secretary Janet Yellen urged lawmakers on Friday to increase or suspend the nation’s debt limit as soon as possible and warned that if Congress does not act by Aug. 2 the Treasury Department would need to take “extraordinary measures” to prevent a U.S. default.

In a letter to House of Representatives Speaker Nancy Pelosi, Yellen said that Oct. 1, the first day of the next fiscal year, could be a critical date for the U.S. ability to pay its obligations without debt limit legislation due to large federal outlays scheduled for then.

In the letter, also sent to other congressional leaders from both parties, Yellen said U.S. debt would be at the statutory limit on Aug 1, when a two-year suspension is set to expire.

A partisan fight https://www.reuters.com/world/us/every-time-its-messy-us-again-approaching-debt-ceiling-2021-07-21 over raising the debt ceiling erupted in Congress this week. Republicans have seized upon the debt limit issue to attack Democrats for pushing legislation that they say has led to inflation and escalating public debt.

“Today, Treasury is announcing that it will suspend the sale of State and Local Government Series (SLGS) securities at 12:00 p.m. on July 30, 2021,” Yellen wrote.

The suspension of such sales to state and local municipal bond issuers will continue until the debt ceiling is suspended or raised, Yellen said.

“If Congress has not acted to suspend or increase the debt limit by Monday, August 2, 2021, Treasury will need to start taking certain additional extraordinary measures in order to prevent the United States from defaulting on its obligations,” Yellen added.

A failure to work out differences among lawmakers over whether government spending cuts should accompany an increase in the statutory debt limit, currently set at $28.5 trillion, could lead to a federal government shutdown – as has happened three times in the past decade – or even a debt default.

White House Press Secretary Jen Psaki told reporters President Joe Biden’s administration is not setting a new deadline for congressional action, but Yellen was offering a sense of the timeline for needed action.

“We certainly expect Congress to act in a bipartisan manner, as they did three times under the prior administration, to raise the debt limit,” Psaki said.

Yellen’s letter said it was unclear how long the Treasury measures would last, citing heightened uncertainty about forecasting payments and revenues due to the COVID-19 pandemic. Yellen said there are scenarios under which Treasury’s cash and extraordinary measures to continue borrowing could be exhausted soon after Congress fully returns from its summer recess in mid-September.

“For example, on October 1 alone, cash and extraordinary measures are expected to decrease by about $150 billion due to large mandatory payments, including a Department of Defense-related retirement and healthcare investment,” Yellen said.

Yellen told Reuters in an interview last week that the Treasury is on track to end July with a $450 billion cash balance, compared to $1.12 trillion at the end of March.

On Wednesday, Treasury reported https://fsapps.fiscal.treasury.gov/dts/files/21072100.pdf a cash balance of $616.3 billion and total debt of $28.44 trillion subject to the federal debt ceiling.

Disclaimer: Fusion Media would like to remind you that the data contained in this website is not necessarily real-time nor accurate. All CFDs (stocks, indexes, futures) and Forex prices are not provided by exchanges but rather by market makers, and so prices may not be accurate and may differ from the actual market price, meaning prices are indicative and not appropriate for trading purposes. Therefore Fusion Media doesn`t bear any responsibility for any trading losses you might incur as a result of using this data.

Fusion Media or anyone involved with Fusion Media will not accept any liability for loss or damage as a result of reliance on the information including data, quotes, charts and buy/sell signals contained within this website. Please be fully informed regarding the risks and costs associated with trading the financial markets, it is one of the riskiest investment forms possible.