Top two inches: How Billy Holland set out on his path into Munster’s record books

THE TALL TIMBER acts as a solid anchor point for every good rugby team.

Cast the eye across the landscape of the four provinces and see them reach skyward.  Connacht have a skyscrapers at 6’8″, Ulster have their captain standing 6′ 6, the same height as the explosive young talent in Leinster.

Even if you’re 6’3″, you might be hard pressed not to take on a touch of a Napoleon complex trying to make it as a second row in professional rugby. Particularly, if you emerge onto onto an Ireland schools squad and find yourself paired with almost seven feet of Devin Toner.

Even for those only slightly shorter than most of the best locks around, the modern game of fine margins places enormous store in a matter of inches.

Without the full range of reach possessed by your rivals, you have to be a bit special to, not just make it in the position, but to climb to become Munster’s second-most capped player.

You have to be driven.

You have to unflinchingly determined.

You have to make the top two inches count.

“Billy isn’t a small man, but he’s not the giants you have out there now,” says Brian Hickey, who has worked with Billy Holland both as a forwards coach in Munster and also in Cork Con.

Hickey is speaking to The42 a week after reading an interesting interview with another former charge, John Kelly, in the Examiner.

With Holland having announced his decision to retire at the end of the current season, he can’t help but be drawn to compare under-rated, indispensable, stalwarts from two eras and two very different positions.

“In both their cases, the perception was that (they had physical shortcomings) – John ‘was lacking a yard of pace’ and Billy ‘was lacking an inch or two of height to make it’.

But I think the two of them are examples who made absolutely everything of the talents they were given.

“The common thread in the two of them was that they’re very smart, intuitive and have very good rugby brains.

“They knew that, maybe if they work on their weaknesses, but really augment their positives they would get a lot out of it.

“Very competitive fellas, there’s a bit of dog in both of them.”

“The group were fitness tested by management, with Billy Holland scoring highest amongst the forwards.”

As Holland prepares to hang up his boots approaching 250 Munster caps after the most trying and traumatic years in his personal life, it’s tempting to view his career as a fine wine. That he eventually figured out where the shortcuts around the field were and used every nugget of experience count to his advantage.

That all may be true, but if he is aging like a rich vintage it’s because he was rooted in the Munster Terroir from the very beginning. His father Jerry was a second row with Munster and Ireland before him and the younger Holland’s abilities did not go unnoticed by national selectors at age grade.

Of course, after 245 caps for your province it’s easy to forget the youthful pedigree Holland took into the Munster academy with him. Pedigree and innate rugby intelligence, he soon found out, only take a prospect so far.

“Like every professional sportsman, a career doesn’t always go smoothly,” says Hamish Adams, former Munster academy director, current Athletics Ireland Chief Executive and a man Holland credits with ‘putting a rocket up my arse’ when he was teetering on the edge of flunking out of the academy.

“He went through a tough time in the academy and we did debate in his year two, he wasn’t playing well when he was at UCC. I think Billy would admit that.

“His progress into year three was discussed. Discussed seriously.”

Adams adds: “He was probably just finding his feet in terms of leaving school and going to college, change in lifestyle and training as a professional.

“When you go from an amateur training programme to a professional training programme, at some stage your body rebels and it can take time to adjust – it’s probably different now because kids are training (to the highest standard) younger.” 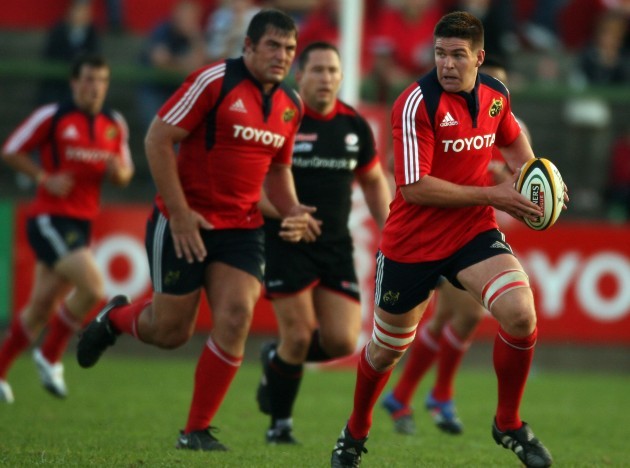 Holland runs up against Saracens pre-season in 2007, before his competitive debut.

In an ordinary career, that might be the moment everything clicks and we get to type out ‘he’s never looked back since’. But Holland’s extraordinary, record-challenging career in Munster has no such simple trajectory.  He made his debut at 22, reached a hundred caps when he was 30, but in the five years since he has quickened the pace at which he gathers appearances and here he is at 245 and still not out.

Although Holland always had ability under-pinning a voracious competitive streak, other factors outside of himself cannot be ignored when looking back on the slow burning days of those first 100 caps. It was just the Test Lion locks in his way, he was able to slot into the back row too. Munster’s pack as a whole had stood every test Europe had to offer, there was no straightforward route in.

“You could have rolled the team off the tip of your tongue without thinking too hard. So for young guys wanting to break in, it was tough.”

Those years on the fringes, weighing up the right option and the easy option, were a stern test of Holland in many regards. His resolve was further examined when then coach Rob Penney advised him to seek out another club in 2014. He jokes that he flipped a coin 50 times and decided a 26-24 outcome was reason enough to stay, but we have to suspect that the truth is Holland had long since resolved to cling grimly to hope that Munster was the place for him to forge his legacy.

“Nobody’s entitled to walk into a Munster jersey,” Holland told the Examiner’s Charlie Mulqueen in 2011.

“What makes Munster different is that people are prepared to bide their time. You don’t get anything easy and the easy option would be to get up and leave but the easy option isn’t always the right option.”

In the weeks when he wasn’t selected for Munster, that dogged determination was not spent on naval-gazing, re-deliberating what the ‘right’ and ‘easy’ options were. It was diverted into the All-Ireland League and Con were delighted to give him an outlet to hone his set-piece prowess. A skill that would become his great point of difference this side of 30. 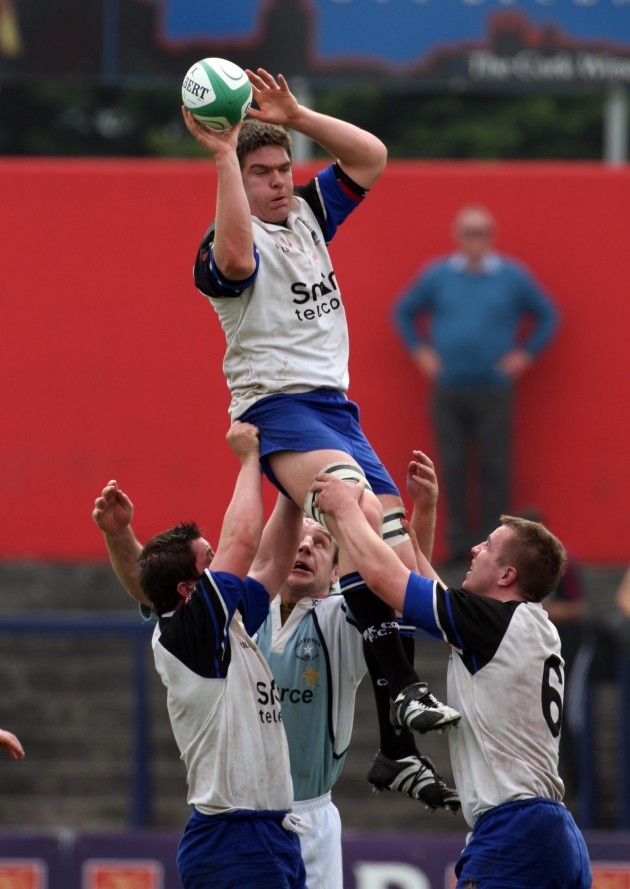 Holland takes a line-out for Cork Con against Garryowen in the 2008 AIL Division 1 final.

“He wouldn’t have been the primary caller in Munster,” says Hickey, “but when he came back to Con – because he wasn’t with us every Tuesday night – he was very quick at picking things up and it became impossible not to have him call the line-out.

“I think he used those years of maybe not getting rewarded to build up that skill.

Be part
of the team

Access exclusive podcasts, interviews and analysis with a monthly or annual membership.


“What he might have lacked in inches, he made up for with a thirst for knowledge. He became practically indispensable.

“The last few years when I went down to Munster, (watching him) he would have made me redundant as a coach.”

“The big thing then is that you need massive knowledge, you need a good bank of line-outs in your head. You need a lot of experience.

“Billy wouldn’t look at three or four games, Billy would be looking at opposition going back to last year.

“It’s a tribute to him that he done that when he hadn’t been a first-team player. When he’s sub he has done it and you see when he comes on the pitch, people defer to his line-out ability.”

In an interview with Donal Lenihan published in the Examiner over Christmas, the two legendary Munster locks touch on one line-out in particular that perfectly illustrates Holland the player, and the man.

Exeter at home in January 2019, Holland notes afterwards that they hadn’t used the exact move before, but he has a hunch that they’re manipulating him towards the front of the line-out so they can set up a maul at the tail. He held his position, let Jeremy Loughman and CJ Stander throw him where he stood and stole Luke Cowan-Dickie’s throw deep in the Munster 22 with minutes to go in a 9-7 win.

The intuitive game-winning play, however, is merely a footnote in the all too real story of Holland’s heartbreaking 2019. The veteran lock had prepared to face the powerhouse English club while commuting back and forth to Limerick from Crumlin Children’s Hospital, where his wife Lanlih was staying while newborn daughter Emmeline was being treated for a heart defect. Emmeline died at the age of six months that summer.

Holland’s willingness to tell the most difficult kind of story imaginable with Lanlih and their efforts to raise over €600,000 for the children’s hospital won the hearts of a nation. He became a household name through the front, rather than the back, of newspapers. There was widespread delight when the couple announced ‘a gift from Emmeline’ last year as Lanlih gave birth to Matthew.

As Holland retires, that is the legacy he is focused on, fatherhood and family.

Rugby’s importance pales to blank by comparison, yet his fingerprints remain on rugby around Munster, core values that speak not to only to how he worked at his craft on and off the pitch, but how he acted as a person.

“No one ever begrudged Billy coming back,” Hickey says of Holland’s outings for Con over the years, “because they knew Billy was going to give everything and that he had done the work. He didn’t take that for granted.

“That’s an area that he has led the way in. He knows that he’s maybe causing a player who’s been training on a Tuesday and working away to step down to the bench. That’s why I mention his honesty and integrity.”

Those words come up time and again when the subject is Billy Holland.

That’s the measure of the man.

“I couldn’t say enough about the guy in terms of his work ethic, his values, character, his rugby intellect. He’s a pleasure to work with,” says Adams.

“You can’t always measure those things, but the people closest to him know how important they are.”

For more great storytelling and analysis from our award-winning journalists, join the club at The42 Membership today. Click here to find out more >