US PRESIDENT JOE Biden has warned world leaders this is the “decisive decade” to avoid the worst impacts of climate change as he outlined targets for the US to halve its emissions by 2030.

Biden set out a new target to achieve a 50-52% reduction in emissions from 2005 levels by 2030, as he hosted a virtual leaders summit to galvanise international action to curb rising global temperatures.

Biden and Boris Johnson, who also addressed the summit, both sought to highlight the opportunity to create good jobs from shifting to clean energy and technology as they urged other countries to follow their lead with action.

Despite a few technical hitches, the summit’s first session provided a powerful roll call of leaders of major economies stressing the importance of tackling climate change – and in a number of cases setting out new efforts.

The new US target is part of the country’s national climate plan, which it is submitting as part of its return to the Paris climate accord, the world’s first comprehensive climate treaty which Donald Trump quit when he was president.

Countries have been expected to come forward with more ambitious plans up to 2030, known as nationally determined contributions (NDC) in the Paris deal, ahead of a major UN summit, Cop26, taking place in November.

That is because existing plans are not nearly enough to meet countries’ commitments under the Paris deal to curb global temperature rises to as little as 1.5C if possible and avoid the most dangerous impacts of climate change.

Minister for the Environment, Climate and Communications Eamonn Ryan said the ambition in the US pledge aligns with Ireland’s increased ambition as set out in the provisions in Ireland’s Climate bill

“I am confirming Ireland’s commitment in the summit session on Climate Adaptation and Resilience this afternoon and am proud to say that the Irish people are stepping up to the plate,” Minister Ryan said ahead of today’s summit.

“Our new climate legislation, to be enacted shortly, commits Ireland to achieve climate neutrality by 2050 at the latest, and a 51% reduction in emissions by 2030 (as compared to 2018). These targets are some of the most ambitious of any developed country, fully in line with our Paris Agreement obligations and IPCC advice.”

Among the other countries bringing forward new targets were Japan, whose prime minister Yoshihide Suga said its target would be a 46% cut on 2013 levels, compared to an earlier 26% goal, with efforts to push the reduction as high as 50%.

Canada’s prime minister Justin Trudeau announced his country’s new target of slashing carbon emissions by 40% to 45% by 2030 compared to 2005 levels, saying it was “on track to blow past” the old target of a 30% cut.

The European Union has agreed a new climate law which includes a goal to cut its emissions by 55% by 2030 on 1990 levels.

And for the UK, Johnson this week announced a “world-leading” target to cut emissions by 78% on 1990 levels by 2035, which builds on plans to cut pollution by 68% by 2030, the most ambitious among leading economies.

But campaigners in the UK have warned that policies and action are urgently needed to deliver on the pledges and cut pollution from homes, transport, industry and power supplies.

Analysts at Climate Action Tracker said the new US target would reduce the global emissions gap between action pledged and the cuts needed to meet the Paris goals by around 5-10% in 2030, but bigger cuts would be needed for the US to play its part in meeting the 1.5C target.

Opening the summit, Biden said: “The signs are unmistakable, the science is undeniable. The cost of inaction keeps mounting.

“The United States isn’t waiting, we are resolving to take action, not only our federal government but our cities and our states all across our country, small business, large corporations, American workers in every field.”

He said the US could not solve the problem on its own, and urged: “All of us, particularly those who represent the world’s largest economies, we have to step up.

No news is bad news
Support The Journal

“Those that do take action and make bold investments in their people, in clean energy futures, will win the good jobs of tomorrow and make their economies more resilient and more competitive.”

And he warned: “Scientists tell us that this is the decisive decade. This is the decade we must make decisions that will avoid the worst consequences of the climate crisis.

“We must try to keep the Earth’s temperature to an increase of 1.5C,” he said, warning a world beyond 1.5C meant more frequent and intense fires, floods, droughts, heatwaves and hurricanes hitting communities, lives and livelihoods. 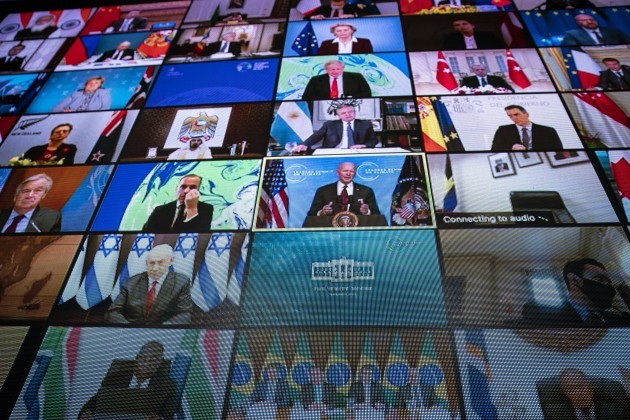 Johnson said new technology that could store carbon, new crops and cheap hydrogen could help tackle the climate crisis, as he welcomed the US’s “game-changing” announcement and highlighted UK action.

“As host of Cop26 we want to see similar ambitions around the world, we are working with everybody from the smallest nations to the biggest emitters to secure commitments that will keep change to within 1.5C.

“I think we can do it, to do it we need scientists in all of our countries to work together to produce the technological solutions that humanity is going to need,” he said.

He also highlighted the need for rich nations to go beyond existing commitments to deliver 100 billion US dollars a year in finance to support developing countries to tackle the climate crisis.

He said climate action was not an “expensive, politically correct, green act of bunny hugging” but could deliver green jobs and growth, and the world could build back better from the pandemic by building back greener.

“Let’s use this extraordinary moment and the incredible technology that we’re working on to make this decade the moment of decisive change in the fight against climate change and let’s do it together,” he urged.