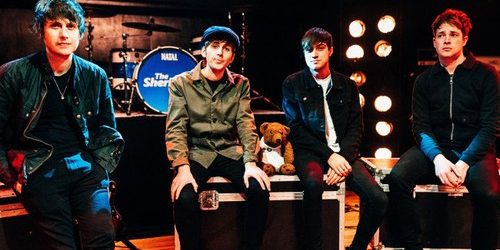 The Sherlocks are set to embark on a UK tour in February and March 2022.

The indie rockers fronted by Kiaran Crook are gearing up to release their new album, ‘World I Understand’, and they’ve announced a string of dates for early next year, kicking off on February 4 in Blackpool and wrapping at London’s O2 Academy Islington on March 12.

Frontman Kiaran – who is joined by brother Brandon Crook and new members Alex Procter and Trent Jackson in the group – said: “We can’t wait to get back out on tour with this new record.

“It is without a doubt our strongest one yet, and one that’s readymade for the live performances. It’s gonna be an absolute monster of a tour and we look forward to seeing you all at the front soon!”

Meanwhile, The Sherlocks are currently on the ‘Keep Our Independent Venues Alive’ tour.

Kiaran and co are performing at some of the UK’s beloved grassroots venues which have been hit hard financially amid the COVID-19 pandemic.

The run continues at The Parish in Wrexham, Wales, on October 14.

Kiaran previously warned that without grassroots venues “the next generation of bands can’t survive”.

He said: “A huge part of this industry relies on live gigs, and it’s not just the bands who are suffering as a result! It’s the venues, the staff, the guitar/drum techs, the sound engineers, the roadies…. the whole package! We hope this tour can help support these grassroot spaces which in turn helps those connected and gives upcoming bands the platform to grow.

“The message is simple. Without these venues, the next generation of bands can’t survive. Let’s take this tour to send a thank you to all the amazing places that have helped build some of the world’s most successful and inspiring bands!”