The Patriotic Art of the Arc de Triomphe, Paris 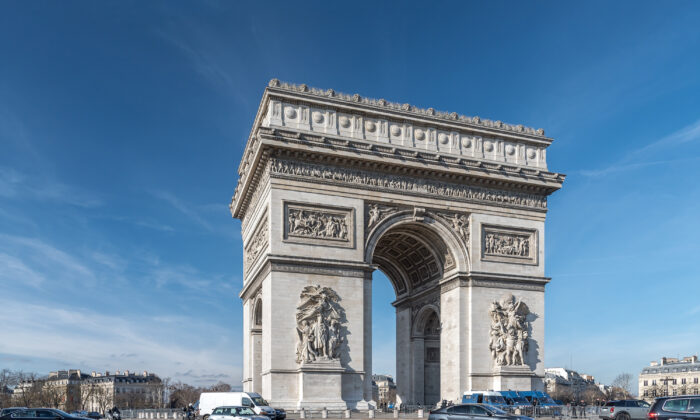 A French national treasure, the Arc de Triomphe de l’Étoile, stands a colossal 164 feet high, 148 feet wide, and 72 feet deep and is dedicated to the armies of the Republic and Empire. (Paris 16/CC BY-SA 2.0) )

Larger Than Life: Art that inspires us through the ages

In 1805, Napoléon Bonaparte promised “triumphal arches” to his troops after they won the Battle of Austerlitz.

As a great admirer of the fine arts of antiquity, Bonaparte charged architect Jean-François-Thérèse Chalgrin to look at classical architecture for inspiration. Chalgrin looked to the Arch of Titus (A.D. 81) in Rome for his design, although the Arc de Triomphe has no columns.

The 164-foot, neoclassical arch shows scenes of dynastic life as well as battle scenes, which differs from the classical tradition of triumphal arches that depict military victories only.

The east façade faces the Champs-Élysées, which in Bonaparte’s time would have faced the Tuileries, or the royal and then the emperor’s imperial palace. (The palace was destroyed in 1871 during the Paris Commune.) A frieze runs around the arch, near the top. The east façade frieze shows French troops as they depart for new campaigns, and the west façade shows the troops as they return.

At the base of each of the arch’s four pillars, called piers, stands a sculptural group on a pedestal. Each sculpture shows a historic scene. The most famous is the “Departure of the Volunteers of 1792” by François Rude, commonly  known as “La Marseillaise,” which is also the name of the French national anthem.

King Louis-Philippe dedicated the arch in 1836 to the armies of the Republic and the Empire.

To find out more about the Arc de Triomphe, visit Arc-de-Triomphe.fr.en