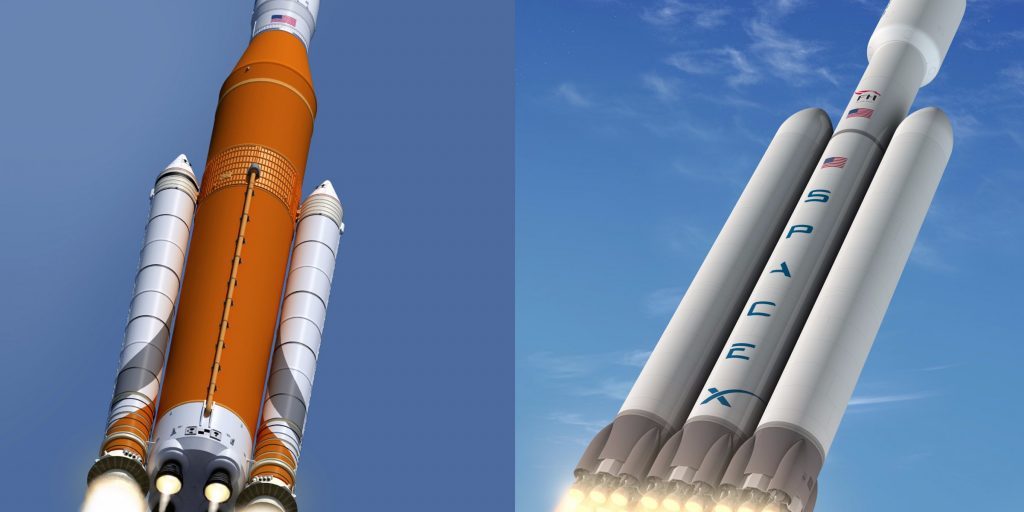 NASA has switched to the SpaceX Falcon Heavy to launch the first two pieces of the Gateway lunar outpost in 2024. This will be a $331 million contract and will use a modified version of the Falcon Heavy. NASA is finally on the path to getting rid of the launch system waste of over 10% of its budget. NASA is still ramping up to waste money on an expensive and mostly useless International Space Station (ISS) in high lunar orbit.

The SLS launch system is the third iteration of efforts to convert and reconfigure the 1980s Space Shuttle components into an Apollo rocket stack. The previous version of the program (called Constellation) had one launch with a lot of problems. The new program had a one-minute hold-down test instead of an eight-minute test. Over $20 billion has been spent on SLS and over $10 billion was spent on the Constellation program. They are now spending $3 billion per year and the first launch and one of only three launches might start next year. This would be over 6 years later than the original plan.

If there are three launches with SLS, then the contractors will need to get paid until 2025 and receive another $10 billion. This will mean SLS will have been paid over $10 billion per launch. This would be over forty times the cost of the modified SpaceX Falcon Heavy. There is a non-zero chance that the first test launch does not happen. There is also even higher likelihood that the SLS program loses the two Artemis missions as well. If SpaceX gets to orbit with the Super Heavy Starship in 2022, then SLS could lose its final two Artemis missions.

Older Wikipedia entry for Space Launch System expected eight Artemis launches using SLS in the 2020s and the Deep Space Habitat and many deep space missions. There were about two dozen missions planned and over a dozen were pretty solid. In 2019, there were four planned launches for the SLS system. This has now been updated to three launches.

The Deep Space Habitat became the Lunar Gateway Program. The Lunar Gateway is a program to use mostly the same contractors who built the International Space Station for $150 billion. They want about a dozen pieces to be built in a highly elliptical seven-day near-rectilinear halo orbit (NRHO) around the Moon, which would bring the station within 3,000 km (1,900 mi) of the lunar north pole at the closest approach and as far away as 70,000 km (43,000 mi) over the lunar south pole.

Brian Wang is a Futurist Thought Leader and a popular Science blogger with 1 million readers per month. His blog Nextbigfuture.com is ranked #1 Science News Blog. It covers many disruptive technology and trends including Space, Robotics, Artificial Intelligence, Medicine, Anti-aging Biotechnology, and Nanotechnology.

Known for identifying cutting edge technologies, he is currently a Co-Founder of a startup and fundraiser for high potential early-stage companies. He is the Head of Research for Allocations for deep technology investments and an Angel Investor at Space Angels.

A frequent speaker at corporations, he has been a TEDx speaker, a Singularity University speaker and guest at numerous interviews for radio and podcasts.  He is open to public speaking and advising engagements.