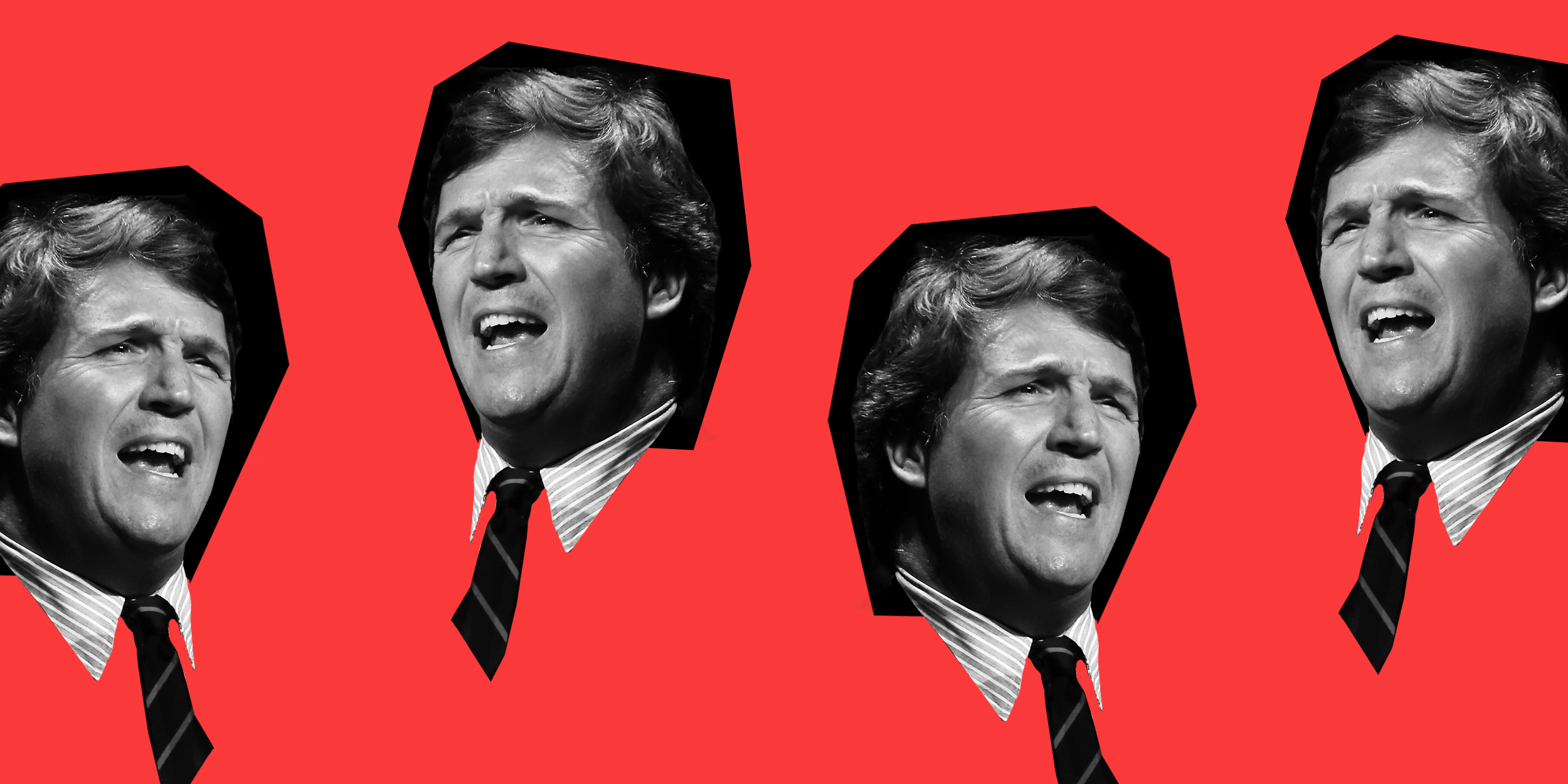 Fox News host Tucker Carlson’s latest round of outrage began with his chastising the U.S. military for being too feminine. I was asked to write this column to weigh in on the feud and inform you, the reader, of the many ways that Carlson is wrong in his analysis. But that’s not what I’m going to do. (Note to the lovely editors: I am sorry.)

You see, as I watch Carlson and his face-on-a-face, the result of his thick layer of TV makeup, pratfall about the left’s latest descent into madness and wokeism, it reminds me of the old ITV version of Sherlock Holmes. If you haven’t seen it, the very hammy and thickly made-up Jeremy Brett bounces from English country estate to Cornish vicarage exposing the deeply sinister machinations of Victorian-age Others: African medicine men and their poisons; drug users and their addictions; women and their wiles.

Brett’s performance is truly something, displaying the inherent artistry of a really good bad performance, contrived by a really good bad actor, who apes the conventions of his age to serve an audience. Carlson does the same in his role, playing the part of “bigot who knows better.” It’s an incredible performance — one that I highly encourage everyone reading this to stop watching.

Because I can see what his audience gets out of it; the physical pleasure that the brain’s reward system, which is linked to the brain’s disgust system, doles out means that the more yucky the other side appears to be, the better we feel about ourselves. But that doesn’t explain why it’s catnip for everyone else.

And to the extent that this is a zero-sum game — where Carlson serves as an arsonist of outrage, the outrage becomes a news story, and the news story points attention back at Tucker, who can now say without reservation that his perspective must be right because the liberals reacted so poorly to his bigotry that he must be on to something — Carlson always wins.

When Carlson bullies a reporter, and the reporter incurs a real-world harm because of it, people who actually care about other people have a real challenge: Any response that raises the volume or expands the reach of his original claim will, like gravity, attract more bullies and more heat, and, as we’ve seen, will have absolutely no consequence on the bully itself.

This is a hard paradox of misinformation, and there is only one potential solution for it: a lawsuit. But the laws here protect the bully, because they broadly protect speech, which they probably should, even when we think they should not.

The cruelty, the performance, the reinforcement cycle, the amplification, and yes, your outrage are his goals. He is an actor. A bad actor.

If we ignore the bullying, we feel that we sanction it, that our silence is complicity. We worry that our refusal to denounce something that is so obviously unhinged will reflect poorly on our solidarity with the person bullied and, if we are honest, on our own sense of moral rectitude.

We make conscious choices as news consumers to be aware of the piddle that Fox News’s evening hosts often put out. So, we cannot help but feel put out, or weakened, or angry, by words we know will have a harmful effect on people we care about. Our first instinct may be rooted in this empathy: We have to stop it, and we have to denounce it. And then, because we are just as human as Tucker Carlson is, and because we are forced to use social platforms designed to weaponize our own instincts in service of repeated social rewards, we amplify our own outrage.

It is insufficient to try to argue about the role of women in the military, because that’s not what Carlson cares about it. It is insufficient to make a nuanced point about changing publication and audience standards, and how certain books age less well than others, because Carlson isn’t interested.

It is insufficient to open a discussion about gender and sex and children’s toys, because I promise you: Carlson wants you to be earnest so he can be smarmy.

The cruelty, the performance, the reinforcement cycle, the amplification, and yes, your outrage are his goals. He is an actor. A bad actor.

I have decided to (mostly) disengage from tweeting about stuff I found outrageous, if only because the reward I think I’m getting is actually, over time, eroding my sense of cause and effect. It’s distorting how I see myself and the world, and most important, is allowing this guy I don’t like to squat in my mind rent-free.

This may be a privilege I can take because I am not forced to work 24/7 in a climate where bullies can easily target me, though they have in the past. But it is a privilege I will take anyway: I need to build resilience. I also need to understand that the luck of being a white man helps me afford that privilege, which many cannot.

I don’t see a way out of this trap. There are trade-offs, and they are hard to process.

If you feel compelled to engage, maybe you can pick and choose your battles. Maybe you can mute the word “Tucker Carlson” on Twitter for two weeks out of three and see what happens. You can show support for a cause by donating time and energy to that cause, instead of spending your compassion on tweets. You can provide direct assistance to victims of bullying by helping them privately, or through an NGO, although I understand how public solidarity can be helpful and therapeutic. But perhaps we can find ways to do good without feeding the troll, absent any evidence at all that we have tools at our disposal to excise him.

If there’s a bottom line for me, it is this: I platform people who are not bigots, who have interesting ideas, even dangerous ones, and who act in good faith. I want to help create a media ecology where that becomes the norm, not the exception.