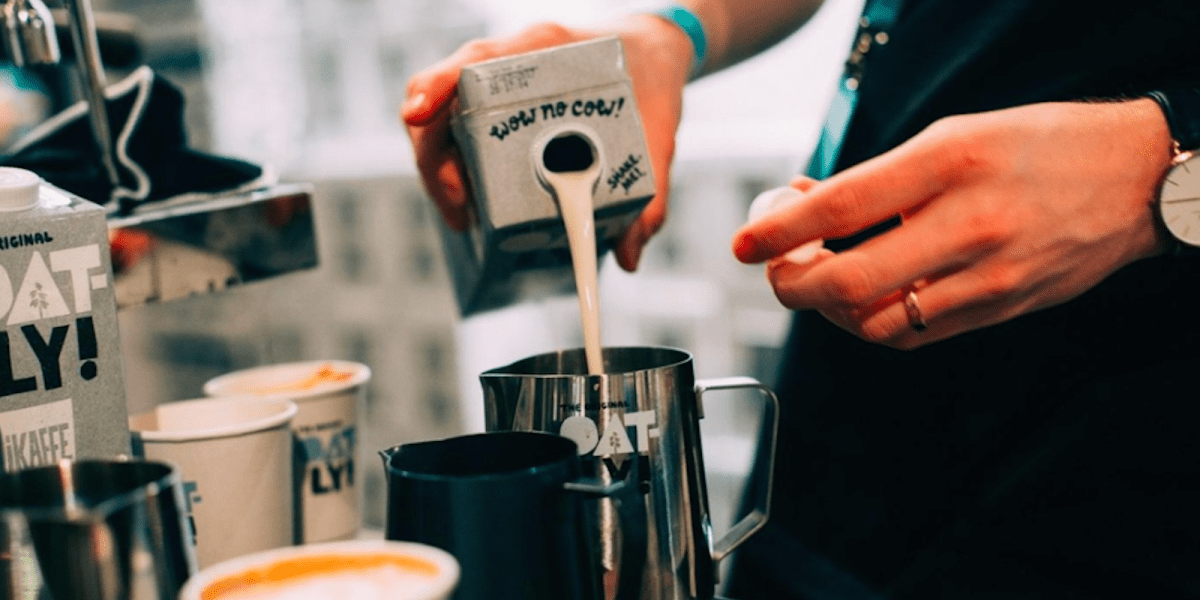 “Oatly has crossed the line from hip to basic,” Bloomberg food reporter Deena Shanker recently declared on Twitter. That may be a diss, but it’s also a testament to the 27-year-old Swedish oat-milk company, which counts Oprah, Jay-Z, and Natalie Portman among its investors. When you’ve got an upcoming IPO with a rumored valuation of $10 billion, who needs cool anyway?

Oatly has been around since 1994, when Swedish food scientist Rickard Öste developed the dairy substitute while researching lactose intolerance at Lund University. But the brand started making a real splash after CEO Toni Petersson took the helm in 2012. Petersson led a redesign of Oatly’s packaging and advertising. The company’s updated vibe—quirky-yet-progressive, with slogans like “No milk. No soy. No badness.”—proved appealing to three oft-overlapping demographics. Environmentally conscious consumers like that Oatly is vegan, uses less land, and produces fewer emissions than dairy milk. Foodies enjoy its creamy texture in their lattes. And youthful types are drawn to brands that don’t take themselves too seriously.

Today, Oatly also sells oat-based ice cream, yogurt, and whipped-cream substitutes, and its products are available in 20 countries. The brand made the jump to the US in 2016 by partnering with hip coffee shops like Intelligentsia and La Colombe, and after deploying a similar strategy in Hong Kong in 2016, has since expanded to mainland China. (Oatly also landed in US Starbucks locations this year.) Oatly’s global sales hit $200 million in 2019, up 82% year-over-year. The company expected sales to double in 2020, though it has not yet disclosed final figures.

Meanwhile, oat milk has become the second-most popular plant-based milk by sales in the US. To keep up with demand, Oatly recently announced two new plants; one, opening in the UK’s Peterborough in 2023, will be capable of producing up to 450 million liters (119 million gallons) of oat milk per year. The company is also opening a $30 million plant in Singapore—its first outside of Europe and North America—in partnership with local food and beverage manufacturer Yeo Hiap Seng, setting it up to expand distribution in China and enter other parts of Asia.

Helping to fuel this growth is the $200 million stake (worth about 10% of the company) that Oatly sold last year to a group of investors led by private equity firm Blackstone. It was an “unexpected choice” of partner, as Oatly acknowledged, given Blackstone’s alleged environmental track record. But the sale helped set up Oatly to confidentially file for an IPO in February. Citing that IPO, the company declined comment for this story.

65%: Portion of the global population with some degree of lactose intolerance

180%: Year-over-year growth in oat-milk sales (by dollars) in the US, according to NielsenIQ data for the week ended Feb. 27

One of the ways Oatly stands out among its peers is with a distinctive brand voice: self-deprecating and no-bullshit, kinda like the sarcastic guy in your college film class whose T-shirts always looked a little dirty. Here are a few of the sassy slogans Oatly is known for:

In another noteworthy marketing endeavor, Oatly created its own Chinese character for vegan milk, featuring the symbol for grass atop the symbol for milk. The company opted not to trademark the character, which translates to “plant milk,” saying it could be applied to any kind of plant-based alternative.

Oatly’s most popular catchphrase—“Like Milk, But Made for Humans”—has generated controversy over the years. The company was sued by the Swedish Dairy Association for implying that cow’s milk is unhealthy, and lost the case in 2015. In Sweden, Oatly isn’t allowed to call its product milk at all.

In 2019, the European Trademark Office also denied Oatly trademark of its catchphrase, finding that the slogan wasn’t sufficiently distinctive. Oatly finally won that battle in January 2021; in its rather complimentary ruling, the EU General Court wrote that the phrase “calls into question the commonly accepted idea that milk is a key element of the human diet” in a way that is “original, imaginative, paradoxical, surprising, thought-provoking and unexpected and is therefore capable of performing the essential function of a trademark.”

But tensions between Oatly and the dairy industry go deeper than a simple catchphrase. In Sweden, European dairy company Arla has taken out ads against alternative milk products that were clear stand-ins for Oatly, referring to it via made-up words like pjölk and brölk, similar to the Swedish word for milk (mjölk). Oatly shrugged off the insult by slapping the words on its packaging, and has returned fire with a campaign calling on Swedes to “flush the milk” for the good of the planet.

Now Oatly is fighting off a proposed rule in the EU that could prevent it and other plant-based alternatives from using terms or imagery reminiscent of dairy (like “creamy”), or from packaging their products in shapes evocative of milk-based products like yogurt cups and milk cartons. The basis of the rule is that consumers might not be able to tell the difference between dairy and vegan products, an assumption Oatly is challenging with an ad that declares, “As it turns out, people are not stupid.”

Demand for Oatly has led to several shortages in recent years. In 2018, an Oatly shortage prompted some sellers on Amazon to hawk it for up to $200 per carton. The company didn’t seem too worried about the situation: The New Yorker quoted Oatly’s then-general manager (now president of its North America operations) as saying occasional shortages let “the humanness of the company to come through.”

Oat milk’s longer shelf life compared to cow milk also led to a run on the product early in the pandemic, with sales up 323% in the last week of February 2020 compared to the year before, while sales of hand sanitizer rose 313%.

Today, another Oatly shortage is upon us: Bloomberg reported in late March that demand is outstripping supply in the US after Covid-19 forced Oatly to delay the planned opening of a plant in Ogden, Utah last year, impacting Starbucks, FreshDirect, and grocery stores alike. But relief is in sight: The Utah plant is expected to start production within the next few months.

The next big alt-milk

If Oatly’s success suggests it’s now too mainstream to be considered hip, that means it’s time to start casting about for the next big thing in alternative milks. Pistachio milk, we’re looking at you.