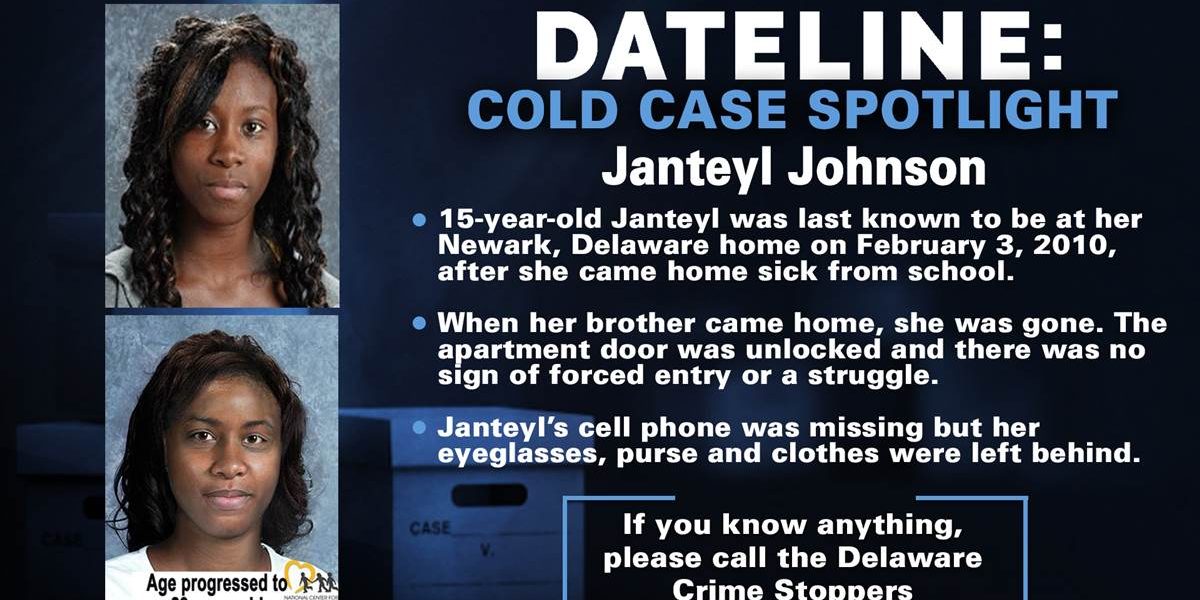 “She loved doing hair… she was always changing hers up,” Janteyl’s mother Kyma Johnson told Dateline. “She always did mine. And her sister’s. It was great having a personal hairstylist. She knew that’s what she wanted to do. It was her goal. But that didn’t happen. Well, we don’t think it did anyway. We just don’t know.”

Janteyl was just 15 years old and five months pregnant when she disappeared from her Newark, Delaware home on February 3, 2010.

“It was a shock when we found out she was pregnant,” Kyma said. “But she continued to go to school. She kept working toward her goal.”

Kyma told Dateline that Janteyl had an upcoming doctor’s appointment to find out if the baby would be a girl or a boy. But she never made it to the appointment.

On February 3, 2010, Janteyl’s brother, who is about 18 months older, drove Kyma to the train station so she could commute to her job in Philadelphia and then took Janteyl to school, all part of their daily routine.

But that day, Janteyl started feeling sick and called her mother just after noon to let her know that she was going home early. Kyma told Dateline that her daughter was planning to return to school in the late afternoon for after school activities and then her brother would pick her up so they could meet Kyma in Philadelphia for church.

“She told me to call and wake her up so she could be ready to go,” Kyma explained. But when Kyma tried to call her daughter’s cell phone, there was no answer.

“I figured she was asleep or went back to school,” Kyma said. “I was not alarmed at that point.”

But when Janteyl’s brother got to the family’s home at Autumn Park Apartments on Winterhaven Drive, she was nowhere to be found. Kyma told Dateline it was evident she had been there, taken a nap and made herself something to eat.

Kyma added that the door was unlocked and Janteyl’s personal belongings, including her glasses, her purse and clothing were left behind

“She just got this new bag – a Betty Boop bag,” Kyma said. “And it was still there. She didn’t just leave.”

Kyma and her son made phone calls to the school and to Janteyl’s friends. But no one had seen or heard from her.

“Now, I’m panicking,” Kyma said softly. “I felt it in my gut. Something had happened.”

Around 10 p.m. that night, Kyma filed a missing persons report with the New Castle County Police Department, who listed her as an endangered runaway.

Kyma told Dateline that the idea of her daughter being a runaway was a possibility, but she believes Janteyl had the intention of returning, but something prevented her from doing so.

“She left everything behind,” Kyma said. “It just didn’t make any sense.”

According to Kyma, phone records revealed that Janteyl received a phone call that afternoon from someone that lasted a few minutes. Kyma added that the number was traced back to a burner phone and the caller was never positively identified.

“I think someone she knew called her outside to go for a drive and talk,” Kyma said. “That’s why it looks like she left so quickly.”

Kyma told Dateline there are a few theories that have been tossed around over the years, including that the man Janteyl said was the father of her unborn baby came to pick her up.

A few days later, Janteyl’s cell phone pinged near the house of the man’s relatives, according to her mother. He has not been publicly identified.

He added that there are no new leads and no suspects in Janteyl’s disappearance at this time, but encourages anyone with information to call police.

Janteyl would be 26 years old today. Her baby would be 11 years old.

“I never even got to find out if my grandchild was a girl or a boy,” Kyma said. “It’s heartbreaking.”

Kyma said she often wonders if Janteyl is alive and well out there. And if her grandchild has the same round cheeks Janteyl did as a baby.

“When she was born, she had the biggest squishy cheeks,” Kyma said with a laugh. “I said she looked like a little puffball.”

“Everyone called her that really until she got older, then her nickname became “J” by her friends and people at school,” she added. “But she was always Puff to us.”

Kyma remembers her daughter as a loving, kind-hearted teen who loved to dance.

“I don’t know what happened that day but I don’t believe she ran away from us,” Kyma said. “It’s been so many years, but it still feels fresh. We’d like answers.”

Janteyl was last seen wearing a black ski jacket with fur around the hood. Her hair was in braids when she disappeared, and her ears are pierced. She has a scar on her chin under her lip. She needs glasses or contact lenses, but wasn’t wearing any at the time of her disappearance.

Anyone with information that could lead to Janteyl’s whereabouts is asked to call Delaware Crime Stoppers at 1-800-TIP-3333, visit the website www.Delaware.crimestoppersweb.com, or contact the New Castle County Police Department at 302-573-2800.