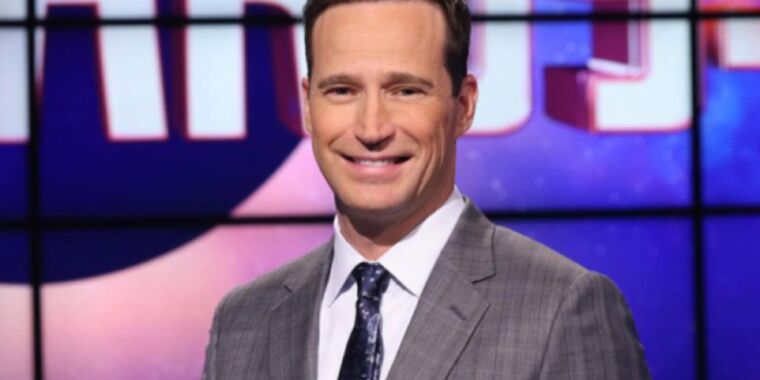 Drama and controversy continue to swirl over the selection of a replacement host for Jeopardy! in the wake of Alex Trebek’s passing from pancreatic cancer complications late last year. Jeopardy! executive producer Mike Richards was named the new host just last week, a decision that sparked an immediate backlash among fans and former contestants of the show. And now, Richards will be stepping down on his very first day of official hosting duties, Deadline Hollywood reports. Richards will continue in his role as executive producer on the game show.

As we previously reported, Trebek’s last episodes aired in January 2021. Throughout the rest of its 37th season, the show used a long list of guest hosts to fill in for Trebek at the podium, including Richards and Mayim Bialik, best known for her roles on The Big Bang Theory and Blossom. (She also has a PhD in neuroscience from UCLA.) The rotation included former Jeopardy! champion Ken Jennings, newscasters Katie Couric and Anderson Cooper, and book enthusiast LeVar Burton. Both Burton and Jennings proved to be fan favorites, and Jennings’ run posted the highest ratings of the season. (Burton’s ratings were lower, perhaps due in part to his episodes competing with the Summer Olympics on NBC.)

Even before his selection, allegations began circulating that Richards had discriminated against several pregnant employees while serving as executive producer of The Price Is Right. (Both suits were eventually settled.) “These were allegations made in employment disputes against the show,” Richards wrote in a memo to Jeopardy! staff. “I want you all to know that the way in which my comments and actions have been characterized in these complaints does not reflect the reality of who I am or how we worked together on The Price is Right.”

On August 11, Sony announced that Richards and Bialik would share hosting duties on Jeopardy! when the show returns for its 38th season later this year, with Richards hosting the regular version of the show and Bialik hosting “prime time and spinoff series, including the upcoming all-new Jeopardy! National College Championship.” The backlash was swift and strong, with some questioning the integrity of the selection process, given Richards’ executive producer role and how little-known he is to audiences compared to the other candidates.

Richards might have weathered that backlash, but then a damning investigative article by Claire McNear appeared two days ago on The Ringer. The piece detailed multiple instances of offensive comments Richards made during his podcast The Randumb Show (purportedly a peek behind the scenes of The Price Is Right), which aired in 2013-2014. McNear’s account relies on a number of unnamed sources, but the podcast comments were public.

McNear combed through all 41 episodes, taking note of all the times Richards “used offensive language and disparaged women’s bodies.” His frequently off-color remarks targeted Haitians, Asians, and Jews, for instance, and he used an offensive term for little people when discussing Broadway star Kristin Chenoweth. The Anti-Defamation League called for an investigation in response.

The podcast audio was pulled down just hours after McNear contacted Sony and Richards for comment, and the hosting site was deleted. Richards issued the following statement to The Ringer:

It is humbling to confront a terribly embarrassing moment of misjudgment, thoughtlessness, and insensitivity from nearly a decade ago. Looking back now, there is no excuse, of course, for the comments I made on this podcast and I am deeply sorry. The podcast was intended to be a series of irreverent conversations between longtime friends who had a history of joking around. Even with the passage of time, it’s more than clear that my attempts to be funny and provocative were not acceptable, and I have removed the episodes. My responsibilities today as a father, husband, and a public personality who speaks to many people through my role on television means I have substantial and serious obligations as a role model, and I intend to live up to them.

In the end, however, there were just too many past controversies, fueling fears that keeping Richards on as host would permanently tarnish the Jeopardy! brand. “We support Mike’s decision to step down as host,” a Sony spokesperson told Deadline Hollywood. “We were surprised this week to learn of Mike’s 2013/2014 podcast and the offensive language he used in the past. We have spoken with him about our concerns and our expectations moving forward. Mike has been with us for the last two years and has led the Jeopardy! team through the most challenging time the show has ever experienced. It is our hope that as EP he will continue to do so with professionalism and respect.”

So what happens to Jeopardy! now? Sony has said it will renew the search for a permanent host, and perhaps that means Jennings and Burton, among other contenders, will get one more chance at assuming Trebek’s mantle. Presumably, Bialik will remain as host for special Jeopardy! projects.

Here is Richards’ resignation memo to Jeopardy! staff in full:

It pains me that these past incidents and comments have cast such a shadow on Jeopardy! as we look to start a new chapter.

As I mentioned last week, I was deeply honored to be asked to host the syndicated show and was thrilled by the opportunity to expand my role. However, over the last several days it has become clear that moving forward as host would be too much of a distraction for our fans and not the right move for the show. As such, I will be stepping down as host effective immediately. As a result, we will be canceling production today.

SPT will now resume the search for a permanent syndicated host. In the meantime, we will be bringing back guest hosts to continue production for the new season, details of which will be announced next week.

I want to apologize to each of you for the unwanted negative attention that has come to Jeopardy! over the last few weeks and for the confusion and delays this is now causing. I know I have a lot of work to do to regain your trust and confidence.