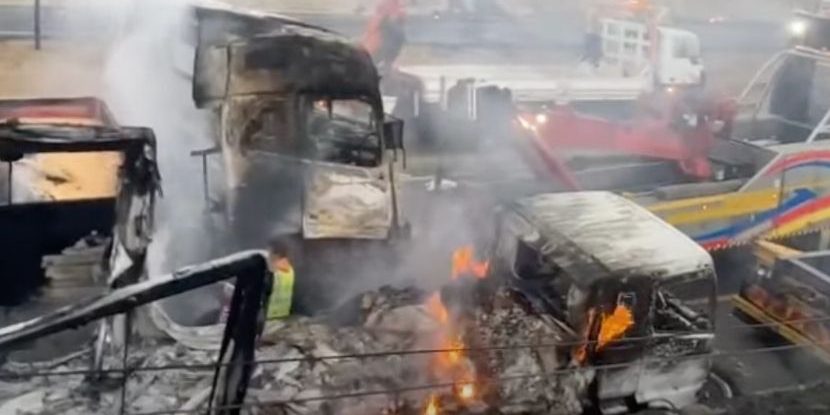 The widespread looting and plundering in KZN since Friday night is hitting global headlines. Among the worst hit areas is Mooi River, site of the busiest toll road on South Africa’s arterial N3 highway between one of the continent’s most active ports, Durban, and SA’s commercial heartland of Gauteng. Donovan Carter, who has been operating businesses in Mooi River for three decades, has a front row view of the chaos which has erupted in the town. He shared what is happening with BizNews founder Alec Hogg – a former resident. Carter’s account of the current destruction in Mooi River is chilling. He states that, this cannot go on forever, otherwise ‘this country will end up bleeding and people will leave.’ – Nadya Swart

The town has been under siege basically since Friday night. The police are trying their level best, but being dispersed all over the country – they are thinning out. And we have looters processing themselves through the town, knocking the SPAR, the Tops, any shop that they can where they see that it’s empty. They’ve just – 15 minutes ago – raided and totally destroyed the Kentucky Fried Chicken directly across the road from me.

On the reason behind the looting and violence in Mooi River:

To be honest with you, I would just say right now it’s a criminal element. Obviously we have political problems in the country at the moment, but I think it’s people just taking advantage of this chaos. And the criminal element is a much larger side than the political side – because when I look at the crowds that are walking around, it’s mostly youth. People that are just breaking, for example, traffic signs or just people’s advertising, just ripping it down and then throwing it down. So I really just think it’s boredom and criminality.

On the consequences of the protests on his staff:

Well, our staff obviously have been hit quite hard over the last year with covid, etc., and they’re desperate to work. You know, we’ve had staff throughout the whole town and the whole province, I suppose the whole country, working short time. And just as things were starting to get a little bit better, we went into the next lockdown. So, they are devastated – because these are people that have come to work every day. They want to work, you know, just like we do. We want to run a business. They’re just good, honest people wanting to make a living and educate their kids and feed their families. So they are devastated because it’s a ripple effect. As it starts with businesses, it moves down towards the staff and their spending power gets less. So it’s just devastating for everybody.

On whether what’s happening in Mooi River is a reflection of high unemployment amongst the youth in South Africa:

Over the years, as you say, 10 years ago when you left – there was still some industry and there were businesses that were sort of flourishing, but they have floundered over the years as more and more people have left and less people are employed and generally, Mooi River is really, I would say, a 90% government grant town. People survive on the grant. The town itself, which relies on local trade, has business on the 15th when the government people get paid for two days and then again at the end of the month when the grants are paid. It’s not even pay day at the end of the month anymore. It’s waiting literally for the government grants. So (definitely) unemployment is a big problem here.

On what he’s seeing in Mooi River:

Two, three years ago – over the Easter periods for two years in a row – and then again the exact same now from Friday night. It’s an easy target, because this toll gate is strategically set. You can’t go left or right – you have to go through the toll gate. It’s between town and the opposite township. So it’s easy access for locals to get to trucks and to loot and to burn. And we just find, as I say, it’s really the criminal element that gets in and makes chaos when there is a small situation. But I think the unemployment and I think the strategic situation of the Mooi River Toll Plaza on the N3 is just a problem really for the town – where it shouldn’t be.

It should actually be the lifeblood of the town because, you know, this town is situated on the N3, which is a main highway. We’ve got the main railway lines running past us. We’ve got a beautiful river that never stops flowing. And we’ve got labour for Africa here. But, you know, with the violence and that – and where the tollgate is situated – it just flares up all the time and it makes people negative about coming (even) through the town. I mean, I get phone calls constantly; is it safe to travel through Mooi River even in quiet times. People have got such a stigma about Mooi River and the Mooi River toll gate at the moment that they would avoid it if they could. If this wasn’t the thoroughfare to Duban from Joburg or vice versa – people wouldn’t come here if they didn’t have to.

On how long it will take to rebuild what’s been destroyed since Friday night:

If I look at the past – from three, four years ago over the Easter periods when we had those two years in a row – and seeing that the town never recovered from those to start off with. More and more people have left, especially as people’s leases are ending, people who are tied into leases are leaving when the leases are ending. They just don’t find Mooi River viable anymore. So I don’t see that there will be a quick recovery at all, if any. I don’t want to just say that it’s Mooi River on its own. But Mooi River being the town that I live in, I can only see it going backwards. We’ve been here 30 years next year and it’s only going backwards. And it’s so sad because it’s such a beautiful area and such a beautiful situation in the Midlands, on the main thoroughfares, as I said earlier. You know, there’s just so much potential here, but it’s being destroyed by apathy and government culture of not doing what it should about certain situations.

On whether the law and order forces are hopelessly insufficient to keep the criminality under control:

Well, currently, look – I think the whole of the SAP, the SANDF – you know, I don’t know if their hands are tied with the laws in our Constitution, but definitely a problem that I’m seeing arising now [is that] there’s obviously very few of them. And with riots jumping all over they’re thin on the ground because they are being moved around. But, you know, for me – when the government security arm such as police and SANDF and that aren’t here to protect citizens and citizens are now beginning to look at defending themselves – that’s just a recipe for civil war.

On whether the security companies operating in Mooi River have been able to help:

The security guys are really trying. I think obviously it’s because they are contracted to do it and they are sort of obligated to by their relationship with the people they protect. But, you know, their hands are also tied to the point that a lot of the guards are unarmed because there’s just so much red tape that goes with somebody if they did retaliate and use lethal force. It’s actually very difficult for any security company, and I think even for the police to use lethal force when necessary, unless it’s the absolute last resort. But, you know, in the meantime, your thugs and your unemployed youth that are bored may know this. So they can break windows, as they did earlier in front of us, with the police watching – because they know the police are not going to retaliate. So I really think everything is inefficient at the moment. I don’t know who’s fault [it is] or who to blame, but it can’t go on like this forever. This country will end up bleeding and people will leave.

On what the police on the scene are doing:

The police are watching. They are literally…I feel for them because I talk to them all the time, because I’m very grateful that they are around our area and sort of at my petrol station because we are at a strategic point – an entry and exit point to Mooi River going to Durban and Johannesburg and obviously the exit and entrance into the township across the road from us. So we have a lot of police presence, especially on the bridge, but they do nothing. They basically are there to monitor the situation. I’m pretty positive that’s obviously the instructions they’ve been given. There hasn’t been a single round fired by any police officer at all. The security do more shooting than the police do. Not that I want them to shoot, don’t get me wrong. But what I’m saying, there’s just no way of trying to calm a situation down or try and control crowds. They just allow them to do that and they follow them. So whether they start injuring people and then they will retaliate, I’m not sure. But while they damage property, the police won’t do anything.

On what other businesses in Mooi River are doing about the situation:

Well, the few businessmen I’ve spoken to – and I’ve had many calls from both farmers and businessmen obviously being concerned for our safety and that – but guys are resigning themselves. The local Spar guy, for example, just mentioned to me that if this devastation continues – he’d rather pack up. It’s not worth his while to reinvest money. Other businesses are just saying, ‘Well, you know, why live in Mooi River with this volatility? It’s such a small town. The business side of it is getting smaller and smaller each year. The cake is getting smaller just because there are no customers.’ And they are saying, ‘We’re leaving.’ We’ve actually seen quite a large contingent of our Muslim community pack up and leave and go down towards Durban and Pietermaritzburg – because there’s just no business. And they just say, you know, if there’s no business, they can’t live in an unsafe area.