Kellie Harrington: ‘I have no tears left to cry. Normally I’m crying all the time’ 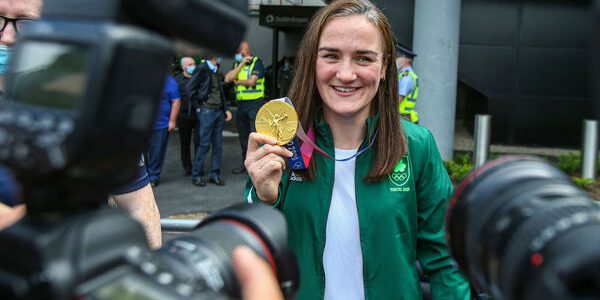 Paris or the pros? That’s the question that Kellie Harrington will face most over the coming months, both in front of the press and behind closed doors.

But when Ireland’s newest Olympic gold medallist says she has “no idea” which side of the fence she will fall on when the time comes, it’s in keeping with the emotional exhaustion she is feeling right now.

She arrived in Dublin Airport on Tuesday yet to sleep since Sunday’s fight, yet to talk to her parents until coming through arrivals, and yet to shed a tear since landing on Dublin soil.

Her head, she says, is “just ready to explode” after flying back to be reunited with her parents and partner Mandy: “I have no tears left to cry. Normally I’m crying all the time. They’re all bawling their eyes out. I’m really happy that it’s them instead of me this time!”

There are barely a handful of Irish sportspeople who can relate to her level of Olympic achievement and the first-name fame that comes with it. Paul O’Donovan, who came through the same doors last week to a barrage of photographs and interviews, said he wasn’t buying into the idea of winning gold “sinking in”. You forget about it and move on, he said.

You feel for Kellie the sinking-in process will be very real, although, like Paul, it’s unlikely to change her.

“I feel quite emotionless right now, probably because I’m tired. I don’t know, I’ve never experienced this before,” she said.

“The media is everywhere and they’re all just pulling out of you left, right, and centre and that just feels weird for me. I’m not used to that.

“Like this is the first time speaking to me ma and da, I think, because I haven’t been ringing people because I’m just so exhausted, and I don’t know what I feel right now. It hasn’t hit me, I’m just like what are all these people… what do they want from me?

“It’s mad like. I can’t really believe it, to be very honest with you. I think it will take me a couple of weeks to not be around the team, to not be in that environment, to actually realise what has happened and what I have achieved.”

The things she is most looking forward to are the simple pleasures: to put her feet up on the sofa, watch TV or listen to the radio, and drink some tea and eat a scone or cake without the need to check her weight every morning.

“I’m not a fame-hogger or anything like that. That’s not me. You know fame, what is fame? I’m all about humility. You can be famous and be a bit of a you-know-what. My people in my community, that’s what means most to me.

“It’s been overwhelming. People are saying you spoke really well in the media. I’m just being me, I’m just speaking the way I would speak to anybody. That’s just me as a person. What you see is what you get.”

Her gold medal will get plenty of outings in time, starting with an open-top bus tour on Tuesday evening, although it has already picked up a mysterious scratch along the way from the ring in Tokyo to Portland Row.

As for defending that title or aiming for others, she said: “I don’t know yet, that’s the answer to that question. I have no idea.

“I’ll see. It’s either Paris or pro. It depends on the offers I’m going to get. We’ll see what offers come my way and I’ll do whatever’s best for me.”

Aidan Walsh, arriving home alongside Harrington, hopes his bronze medal will inspire the kids at Monkstown Boxing Club in Belfast to dream as he did.

“I can’t wait for them just to hold it, feel it, and see it themselves. Seriously, nothing is impossible. I always remember seeing other people’s medals and going ‘ah, it’d be great’, but there’s nothing stopping anybody from getting it. If you’re willing to put in the work, the sky is the limit for you.

“I hope as much kids can hold it and feel it and I’ll give it to the kids in the community and they can take it away for the night if they want it and put it under their pillow and dream about it because you have to dream. That’s just what I’ve done. There’s no secrets, just dream and never stop dreaming.”