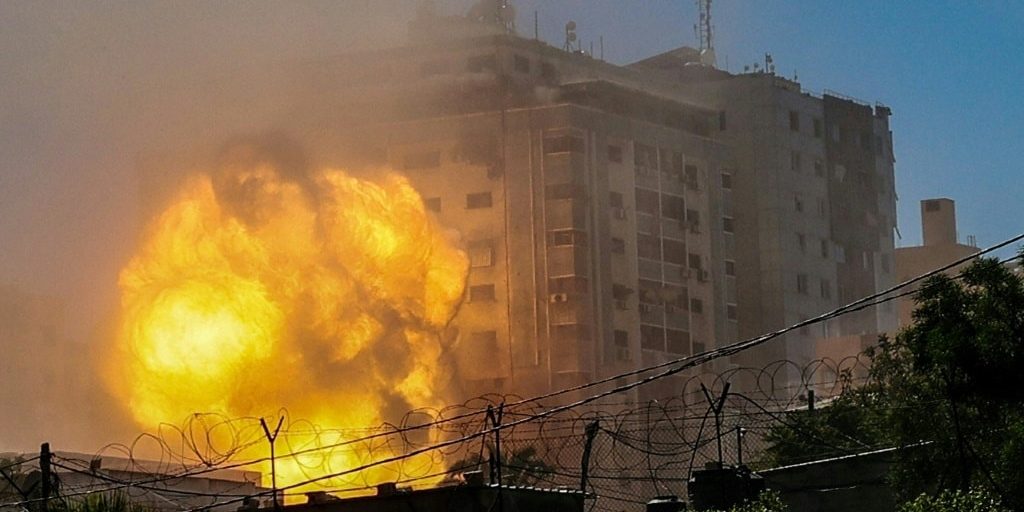 Israeli strikes killed 42 Palestinians in the Gaza Strip on Sunday, the worst daily toll yet in almost a week of deadly clashes, as the UN Security Council met amid global alarm at the escalating conflict.

UN Secretary-General Antonio Guterres pleaded for an immediate end to the bloody violence, warning that the fighting could plunge the region into an “uncontainable security and humanitarian crisis”.

Israel said Sunday morning its “continuing wave of strikes” had in the past 24 hours struck over 90 targets across Gaza, where the destruction of a building housing news media organisations sparked an international outcry.

In Gaza, the death toll kept rising as emergency teams worked to extract bodies from vast piles of smoking rubble, as the bereaved wailed in grief.

“The children were screaming. For half an hour we were bombarded without previous warning. We came out to find the building next door flattened. All the people under the rubble were simple people.”

Israel’s army said Sunday that about 3,000 rockets had been fired from the coastal strip towards Israel — the highest rate ever recorded.

Rockets have hit a number of Israeli residential districts and wounded over 280 people.

“Hamas misjudged the strength of our response,” he said on Sunday.

“Where will hatred and revenge lead? Do we really think we will build peace by destroying the other?” he asked.

The Israeli army said it had targeted the infrastructure of Hamas and Islamic Jihad, including a vast tunnel system, weapons factories and storage sites.

Balls of flame and a cloud of debris shot into the sky Saturday afternoon as Israel’s air force flattened the 13-floor Gaza building housing Al Jazeera and AP news agency, after giving just an hour to evacuate.

“So it is a perfectly legitimate target,” Netanyahu told CBS News. “I can tell you that we took every precaution to make sure that there were no civilian injuries, in fact, no deaths.”

“Simply because of the obstruction of one country, the Security Council hasn’t been able to speak with one voice,” Foreign Minister Wang Yi, whose country holds the Council’s rotating presidency, told a virtual session.

The United States, Israel’s main ally, delayed the Council session last week, and has shown little enthusiasm for a statement.

In public remarks, the Biden administration has steadfastly backed Israel’s right to self-defence, while urging de-escalation.