IPL 2021: It’s AB de Villiers’ world and we are just living in it as RCB beat Mumbai in thriller 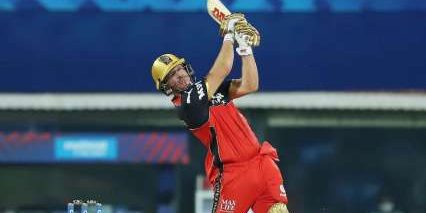 The ageless South African star batsman AB de Villiers was at it again as he helped Royal Challengers Bangalore (RCB) beat Mumbai Indians in the first game of the Indian Premier League (IPL) 2021 season. RCB were coasting along nicely in the chase when skipper Virat Kohli and Glenn Maxwell were batting but one wicket and RCB lost four in quick succession and they required de Villiers to bail them out and he provided that exactly.

After a 52-run partnership between Maxwell and Kohli, RCB lost their way as they lost four wickets in just 24 runs and they were reduced to 122/6 from 98/2 in the space of just four overs. They required 39 runs off the final four and it was De Villiers, who stood for the men in red and gold again.

Smashing four fours and two sixes, De Villiers’ 27-ball 48-run innings ensured RCB weren’t losing the game despite losing the wicket of Kyle Jamieson and himself to run-outs. The Bangalore side needed two runs of the last two balls and Mohammed Siraj and Harshal Patel finished the game as they just had to get the ball touch the bat.

Earlier, Harshal Patel was the star with the ball for the Kohli-led side as his five-wicket haul helped his side keeping Mumbai Indians to a score of 159/8 in their 20 overs.

Chris Lynn and Suryakumar Yadav stitched a 70-run partnership for Mumbai Indians after they lost the wicket of captain Rohit Sharma to a run-out. However, after Kyle Jamieson removed Surya in the 11th over, MI kept losing wickets and couldn’t build any meaningful partnerships and as the skipper Rohit Sharma fell 15 runs short of a good score on a slow pitch.

This was Mumbai Indians’ 9th loss in the first game of an IPL season and RCB too broke their rut of losing the first game of the season as they have lost three games and won this one by two wickets to get their campaign running.