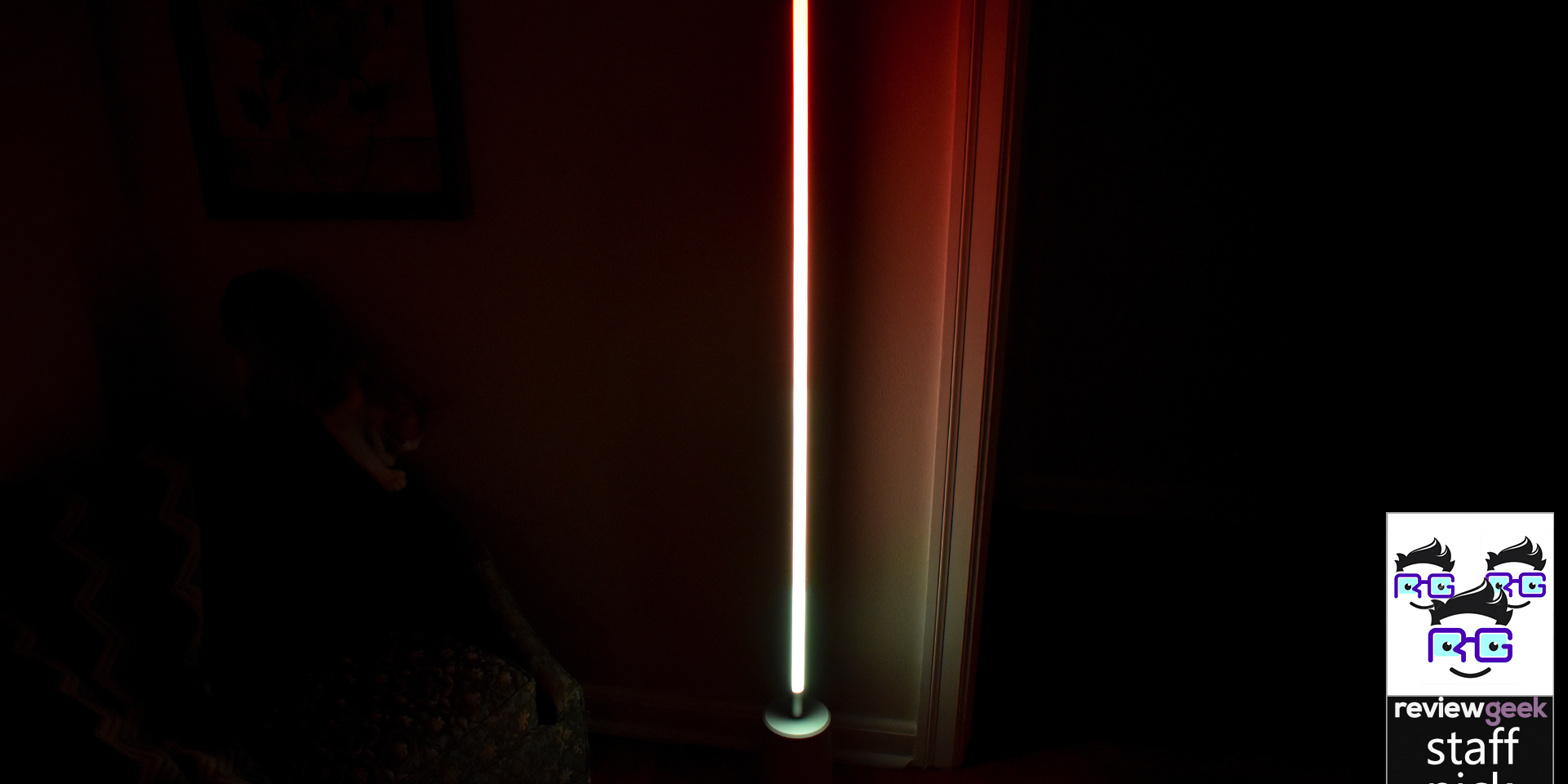 Smart lighting products shouldn’t just hang from your ceiling or stick to your wall. At least, that’s the idea behind Govee’s Lyra floor lamp, an impressive lighting product that can paint a wall with swirling colors or flash to the beat of music for a quick party. While I don’t think that the Lyra is for everyone, it’s an interesting device for smart home enthusiasts, gamers, and party animals.

And What We Don’t

Before we enter this review, I want to take a second to talk about pricing. The Lyra is Govee’s most expensive product at $150, but it’s the most affordable smart lamp that you’ll find in this style with good build quality. The only notable alternative to the Govee Lyra is Philips’ Signe lamp, which costs $250. Now that we have a bit of context, let’s dive in.

As with all Govee products, the Lyra lamp is very easy to assemble. There are just three main parts to put together—the base, the metal frame (which is divided into a few pieces), and the rubbery LED strip. There’s also a magnetic attachment that can hold the Lyra remote, though this piece is optional.

I’ve seen some reviewers complain about this process, and I think they were confused by the Lyra lamp’s frame, which is a bit intimidating when you first open the box. Maybe they should have watched the Govee YouTube tutorial that explains how to assemble the Lyra! Again, it’s very easy, and I think you can do it in under 10 minutes if you don’t let yourself get scared.

When I first heard of the Govee Lyra lamp, I imagined a sleek, black bar with a triangle-shaped base that could sit flush against a wall. It’s a bit different than what I expected, to say the least. The Lyra is a silver aluminum color, its frame is a about the width of a broomstick, and it has a tapered, cylindrical base.

In other words, the Lyra lamp resembles a futuristic butter churn. And in my opinion, it looks a bit awkward sitting around the house during the day. It doesn’t help that the back of the lamp, which is what you’ll spend most of your time looking at (the lights point toward the wall), has some screw heads and a power cable sticking out of it (a very poor design choice).

I think that Govee could have improved on this design by using a triangular base and a swiveling LED frame. That way, you could set the base flush against a wall or directly in the corner of a room. But hey, maybe some people prefer the cylindrical base … and those people are wrong.

Anyway, most of the Lyra’s awkwardness melts away when you finally power it on. Its LED light strip looks fantastic—it’s bright (Govee says up to 1500 lumens), the colors are vibrant, and the gummy rubber stuff that Govee entombs its LEDs in provides a ton of diffusion. This thing really paints a scene on your walls without lighting up a your whole room or looking like a Christmas decoration (let’s face it, most LED strips look like off-season Christmas lights).

And because of Govee’s RGBIC technology, which is a strange way of saying that each LED diode has its own control circuit, multi-color settings look fantastic on the Lyra lamp. Colors blend beautifully but still look distinguished, and don’t even get me started on the animated color settings! Actually … okay, let’s talk about that in the next section.

Wonderful Features Hidden Behind an App

I’m floored by the Lyra lamp’s wealth of features. You can pick solid colors for the lamp to shine, or turn on a music mode that flashes light to external noise (using a built-in mic). You can even customize each segment of the lamp to show a different color, and yeah, each color blends together beautifully thanks to that RGBIC stuff. But my favorite thing about this lamp is its animated lighting effects, which move and swirl to mimic the sunset, or the ocean, or fireworks, or flashy Halloween lights (and yes, you can program your own animated effects).

UNFORTUNATELY, all of the Lyra lamp’s fanciest settings are hidden behind the app. The physical remote control can turn the lamp on and off, switch between solid colors, turn on music mode, or dim the light. Voice controls from Google Assistant and Alexa do even less, as they can’t activate the music mode.

So if you want to use your custom lighting settings or the 25+ pre-made animated lighting effects, you have to open the app. The only concession here is that the lamp will always enter its last-used setting when it powers on, so if you really like the sunset animation, you can just leave it there forever and ever.

Why would anyone want to buy a $150 floor lamp? Well, there are a lot of use-cases for the Lyra lamp. I could see it appealing to gamers, streamers, party freaks, people who are obsessed with Halloween and Christmas lighting, and people who just want a cool entertainment center. Heck, it could even come in handy for photographers, influencers, or models who want cool background lighting.

Most people will just connect the Lyra lamp to their home internet and leave it indoors, and that’s fine. But one feature that I’m very excited about is Bluetooth control. You could take the Lyra lamp to any party, concert, or other away-from-home event and instantly transform the environment. And if you only care about the music mode, then you don’t even need to use Bluetooth, you can just control the Lyra lamp with its remote!

Just don’t expect a lot of fancy smart home stuff from the Lyra lamp. I already mentioned that voice control is very limited, but you can’t automatically sync the Lyra with other lighting products (unless you only use the basic modes, but even then, that would be a pain in the neck). For smart home enthusiasts, that puts the Lyra at a serious disadvantage to Philips’ Signe lamp. Will the average person care though? I don’t think so.

Should You Buy the Govee Lyra?

Govee’s Lyra lamp is a very particular product. It’s cool to use and its fancy lighting modes will rock your socks, but it looks a bit awkward during the daytime and costs a lot of money. So, should you buy it?

If you’re just looking for a high-quality lighting solution with fancy, animated lighting modes, you should probably buy something like the Govee Glide, the Govee Aura, or one of Govee’s basic LED strips. But if you’re a really big fan of the Lyra’s design, I think you should go ahead and pull the trigger. It’s a really fun product, and it’s one of the only smart lighting solutions that can actually leave your home for a quick party or artsy project.

And What We Don’t