Modern day strikers remain an all-round match-winner,specially in a tournament like the Euros, where have arguably seen the best.

Only a few football players have the instinct and opportunities to finish chances and win games. Strikers are the ones blessed with the art of scoring goals. Though the position has evolved over the years its outcome remains the same. In the late 20th century you would expect a striker to position himself in the box and shoot on sight. Over the years, a striker can be found more and more involved in the build-up to the goals. They hold the ball and bring wingers into play, they assist others. .

As we approach the EURO 2020, FootTheBall brings you a list of the best strikers to have played in the prestigious Euros over the years.

The lanky Dutch forward has 5 goals to his name at the Euros. He has produced one of the best individual performances in a major final during the 1988 European Championships. Basten set up the first goal for Ruud Gullit and scored a magical volley from an acute angle to seal a 2-0 win against the Soviet Union. He also scored a crucial goal in the semi-final and a hattrick in the group stages. Inspired by his heroics the Dutch golden generation lifted the cup. His goal in the final was voted amongst the top 100 greatest sporting moments of all time. Basten’s legacy would’ve further solidified if not for a horrific injury that ended his career prematurely. An ankle injury suffered in a league match while playing for AC Milan made playing again impossible for him. He announced retirement in 1995 after conceding defeat to the injury.

Rooney burst onto the global stage with Euro 2004. He became the youngest scorer in the history of the tournament as he scored twice for England against Switzerland in their group fixture. Rooney added two more goals to his tally in the final group fixture against Croatia. He suffered an injury and missed England’s quarterfinal loss to Portugal. His 4 goals earned him a place in the team of the tournament. 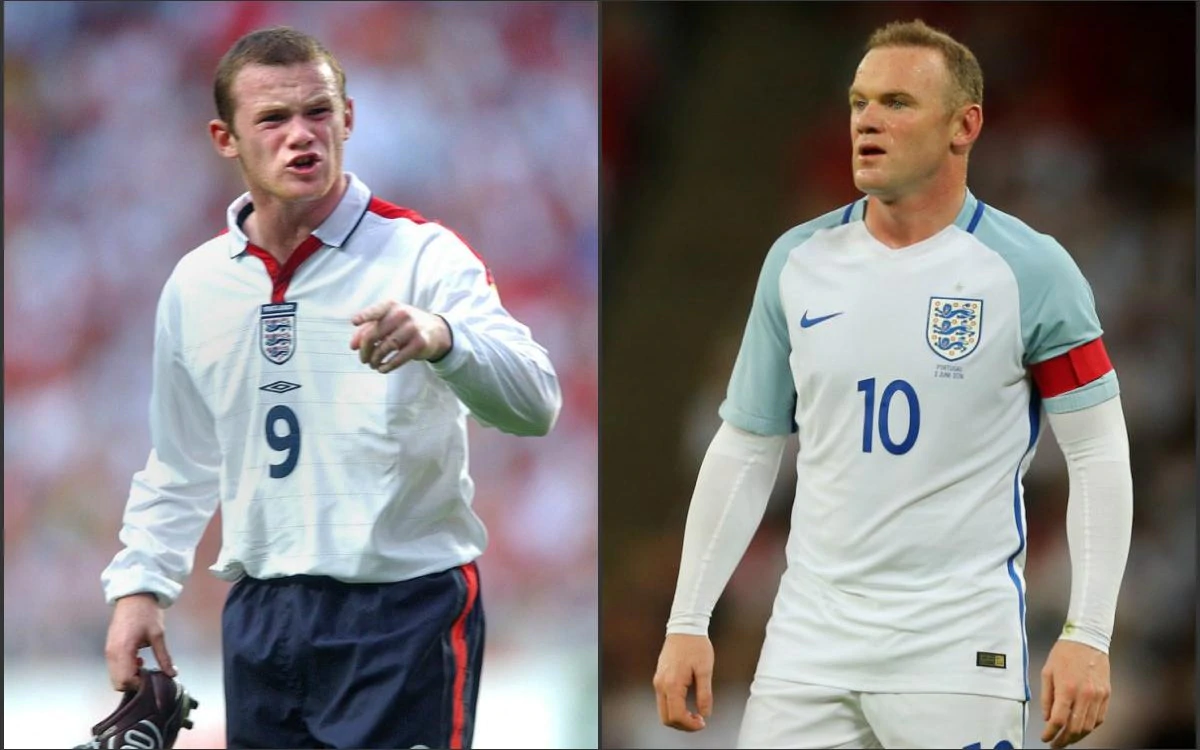 After England missed out on the Euro 2008 qualification, Rooney had to wait till 2012 for another appearance at the tournament. Rooney was sent off in the last qualification game leading to the tournament and missed the initial group stage games. Rooney scored a goal against Ukraine which sent them through to the quarters where they were beaten by Italy.

He further added one more goal to his Euro tally by converting a spot-kick against Iceland in 2016. Though Rooney delivered England weren’t able to win anything leading to criticism of Wazza as well, despite him being one of the best strikers to play at the Euros.

Nistelrooy is considered one of the best strikers of his generation. The Dutchman has 6 goals to his name at the Euros. Injuries ruled him out of Euro 2000 and he had to wait till Euro 2004 to make his tournament debut for the Netherlands. He scored in all the group stage games. The Dutch progressed to the semis where they were beaten by hosts Portugal. Nistelrooy (No 9)(Image Courtesy: The Mirror )

He announced retirement from the national side following his clashes with manager Van Basten in 2006. However, he was brought back from retirement by goalkeeper Edwin van der Sar. Nistelrooy scored 2 goals at the 2008 Euro as the Dutch crashed out of the tournament at quarters.

The ‘Ostravan Maradona’ had a fantastic Euro in 2004. His first goal in the group stage match made him Czech Republic’s youngest ever goalscorer. He went on to record a goal in the next two group stage games. Baros grabbed a quickfire brace in the quarter-final victory over Denmark. He won the golden boot with 5 goals. 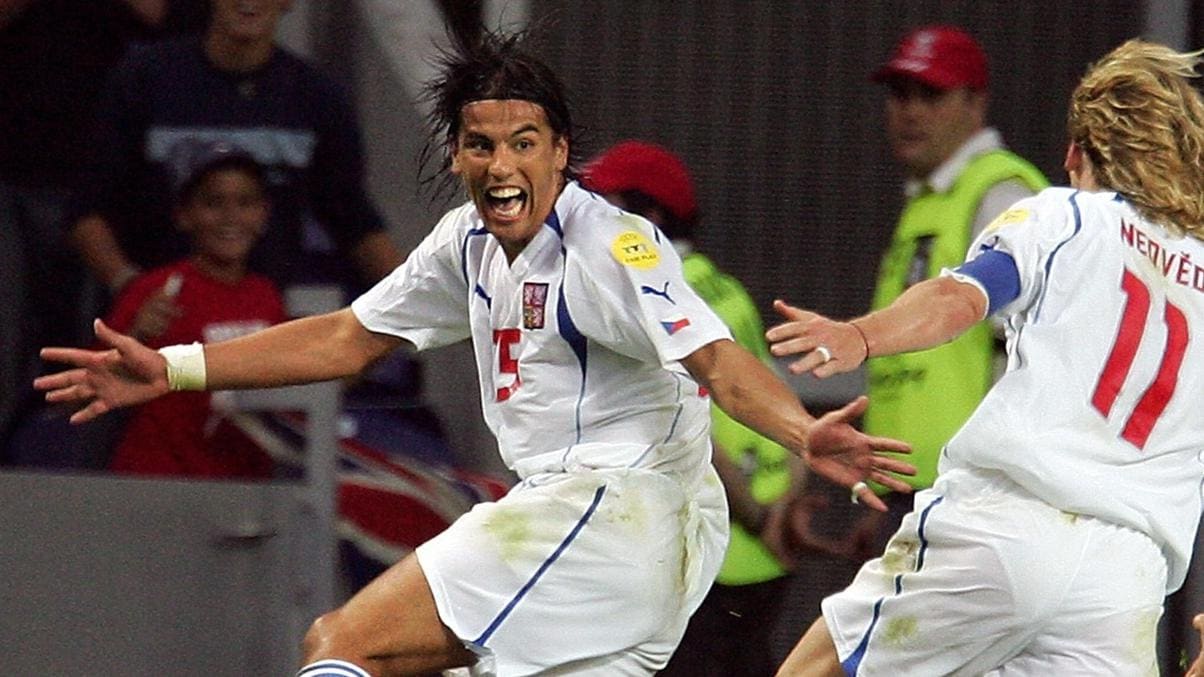 Baros got the nickname as his playing style was similar to the Argentine international. However, he was on a decline internationally and it showed on the big stage. He failed to score at the 2008 Euros.

Torres is the highest scorer for Spain at the Euros with 5 goals. El Nino (The Kid) used to terrify defences with his pace and strength. His finishing was sumptuous. He was also known for assisting his teammates. 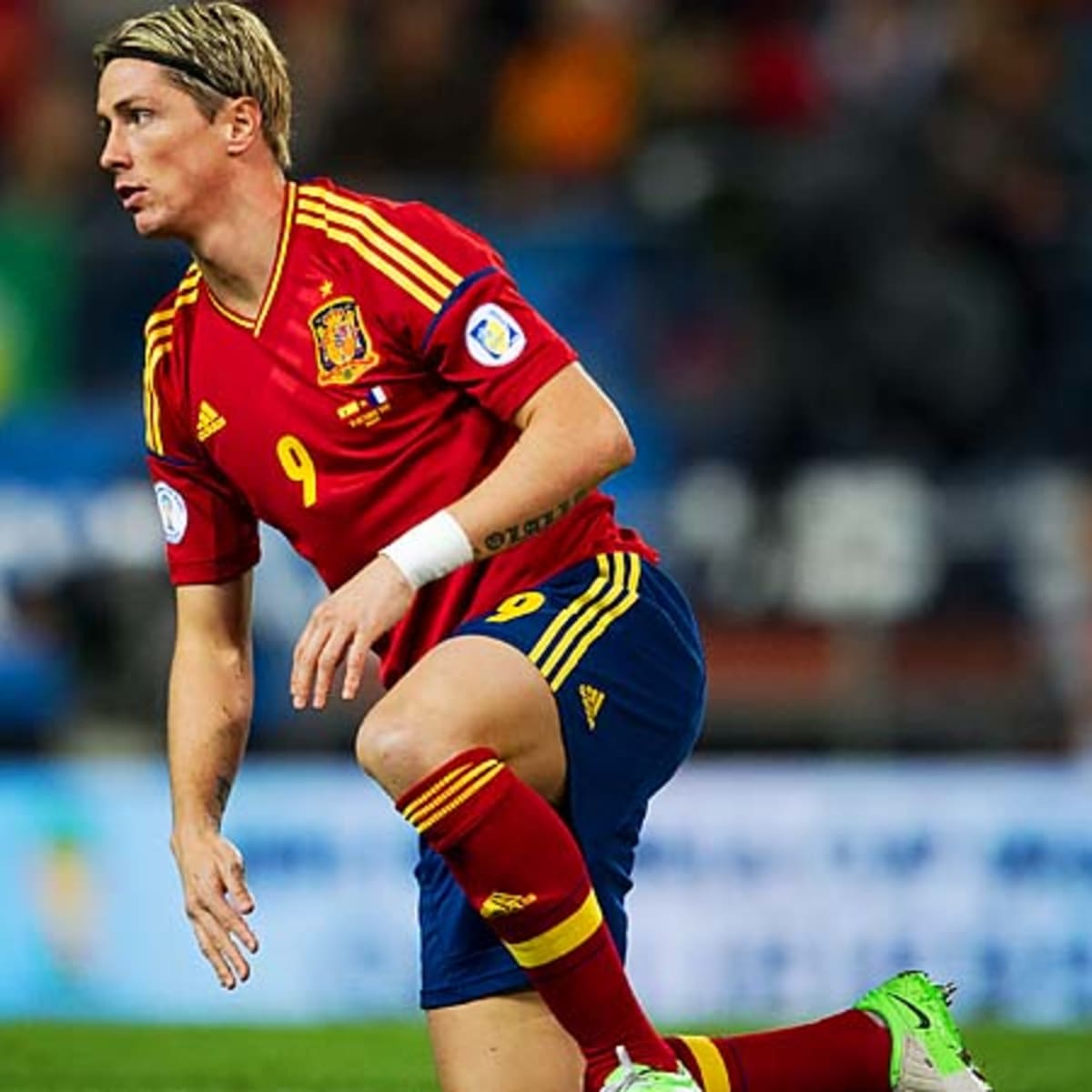 He made his Euro bow in 2008 where he set up David Villa for Spain’s opener. He opened his tally in the next game. Toress’s best performance came in the final as he scored the only goal and produced a man-of-the-match performance against Germany.

Spain’s international dominance continued as they won the 2010 world cup also thanks to key contributions from Torres. He scored 3 goals and assisted once at the 2012 Euro as Spain successfully defended their title. Torres also won the golden boot for his efforts. Even though he struggled at club level during Spain’s golden generation, he will surely go down as one the best strikers to play in the Euros.

The flamboyant Swedish striker has 6 goals to his name at the Euros. Zlatan has produced so many memorable moments in his distinguished career. One of them, was a magical goal against Italy as they drew the game 1-1. With his back to goal, Zlatan scored a sensational backheel volley to stun the world. He also scored one more goal but missed a crucial penalty as Sweden were eliminated by the Netherlands on penalties.

He added 2 goals to his tally in 2008 as they failed to clear the group stages. Zlatan also scored two goals at the 2012 Euros. Zlatan’s sensational volley against France won the goal of the tournament award.If not the best strikers Zlatan will surely go down as the most entertaining strikers to play at the Euros.

Zlatan retired following a disastrous Euro 2016. However, he announced ‘The return of the God’ as he came out of retirement for Euro 2020. He would be determined to lead the young Swedes at the tournament.

Considered the best striker in the history of the Premier League, Shearer enjoyed success at the Euros on a personal level. Immense trust was placed in Shearer before the 1995 Euros as he was nearing a 2-year goal drought for England. He repaid the faith as he scored 5 times at the tournament. Shearer scored 4 goals in the group stages as England progresses to the quarters where they triumphed over Spain on penalties. He headed England ahead in the semis against Germany. They eventually crashed out on penalties as Gareth Southgate missed his spot-kick. The deadly Shearer(Image Courtesy: The Guardian)

A premature end to their Euro 2000 campaign saw Shearer retire from the international circuit. He scored 2 goals in the tournament. Despite constant rumors of a return to the national team, he never came back.

The French forward was at his dazzling best in 2016. He was in the prime of his career and was single-handedly driving the hosts to Euro glory.

He scored his first goal off the bench as France won 2-0 against Albania. 2 more goals followed in the round of 16 as they completed a comeback against the Republic of Ireland. Griezmann assisted twice and scored once as the French dispatched an overperforming Iceland 5-2. A sensational brace in the semis eliminated Germany and sent France to their 3rd Euro finals.

However, Griezmann was left heartbroken as Portugal beat them 1-0. Griezmann won the golden boot and was named the best player of the tournament.

A world cup winner now Griezmann rediscovered his best form at Barca after 2 years. He will be aiming to beat his compatriot Michel Platini’s 9 goal record at the Euros and lift the title.

Described as the best player in the history of the Premier League, Henry was an unstoppable attacking force. Having started his career as a winger, he was made a sole striker after joining Arsenal by Arsene Wenger. His pace, skill, dribbling and finishing made him impossible to defend. 3 goals in the 2000 Euro saw France lift the continental cup. Henry scored the crucial equaliser against Portugal in the semis. The triumph was Henry’s second major international success.The elegant Frenchman will surely go down as one the best strikers to play at the Euros.

Three more goals followed in 2004 and 2008 Euros as Henry entered the latter stages of his career.

The legendary Portuguese international is tied with Michel Platini at 9 goals as the joint highest scorer in the history of Euros. Ronaldo’s quest for an international trophy ended as they lifted the 2016 Euro.

Ronaldo made his bow in the 2004 Euro as he scored 2 goals and 2 assist as an 18-year-old. He led the hosts to the final where he was heartbroken by Greece who stunned the world by winning the tournament.

FACT: 19 year old Cristiano Ronaldo had most goal contributions for Portugal in EURO 2004

He captained Portugal for the first time in 2007 as a 22-year-old. After being handed his favorite number 7 shirt Ronaldo scored only once at the 2008 euro as Portugal were knocked out by Germany at the quarters.

Pitted in the group of death in the 2012 Euro Ronaldo scored twice in the group stages to seal progression. He also headed the only goal as they dumped the Czech Republic in the quarters. However, Portugal were eliminated in the semis on penalties by eventual champions Spain. Ronaldo’s decision to take the last penalty which never arrived was questioned.

2016 Euro saw him lift the Euro in his 4th attempt. He scored two goals in the group stages. Ronaldo’s parried shot was tapped in by Ricardo Quaresma to ensure a 1-0 win over Croatia in the quarters. A goal and an assist in the semis saw him draw level with Platini with 9 goals. He was forced off with an injury in the final against France. Eder’s winner in the 109th minute was enough to seal the trophy.

Cristiano Ronaldo contributed 67% of Portugal’s goal on the way to winning Euro 2016. pic.twitter.com/u6J2v14eWw

An aging Ronaldo would be charged to defend his crown at the Euro 2020 and steer clear of Platini to become the best strikers to grace the Euros.