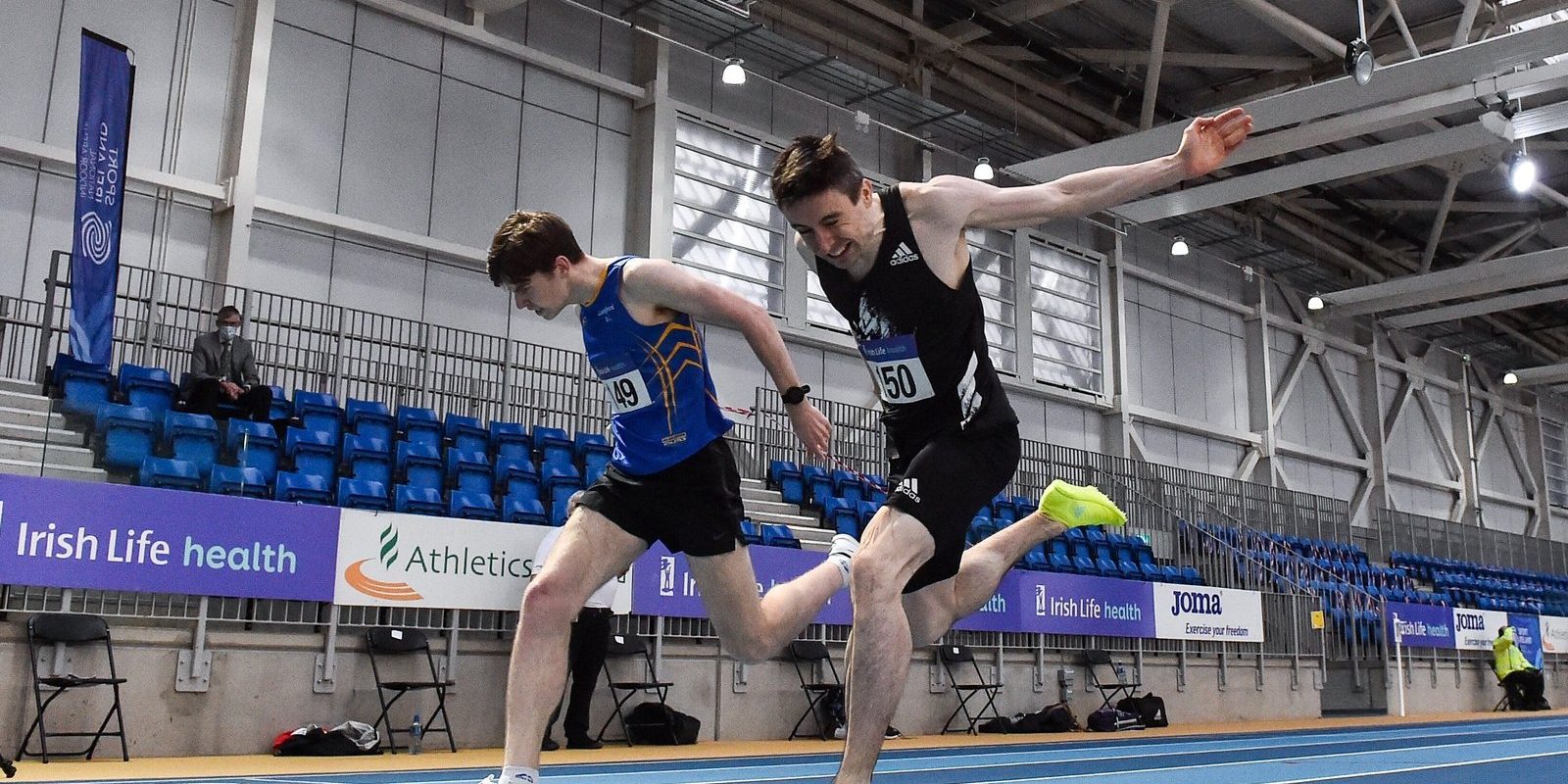 Mark English produced his fastest ever indoor 800 metres time on the first day of the Micro Meeting at the National Indoor Arena in Abbotstown and shattered his own Irish record in the process.

The three-time European medallist needed every straining fibre of his tall frame to fend off the extraordinary emerging talent of 18-year-old Cian McPhillips, the Leaving Cert student from Longford who came up just 0.03 seconds short at the line.

The speed of the race initially seemed to catch trackside officials a little off their guard and with some reason because the times represented the two fastest 800 metre performances indoors in the history of Irish athletics.

McPhillips initially captured many people’s attention a year ago when he won the High School Mile at the Millrose Games in New York but this performance was a leap beyond that, close to world class territory in senior athletics as he moved to No 2 on the European All Time Under-20 list.

English, meanwhile, proved that he is back close to his very best as he took a full seven tenths of a second – equivalent to around five metres of track – off his own Irish record set in 2014.

“It’s nice to come back after so many years and run a personal best. It’s been seven years of hard work and it’s nice to know that the training with Feidhlim Kelly is working well at the moment and that we’re on the right track.”

The pacemaking of Kevin Woods took the athletes through 400 metres in 52 seconds and from there on it was McPhillips who took on the brunt of the work out front with English tracking closely.

The eventual race-winning move came on the crown of the final bend but as English went by and seemed to stretch away, McPhillips fought back to cross the line not much more than the width of a torso behind the Letterkenny man.

Both moved into the top eight on the senior European ranking list for 2021, while Kildare’s John Fitzsimons achieved a European Indoor qualifying standard in third place with 1 minute 47.80 seconds.

The final race of the day was another which caught the eye, with John Travers winning the Men’s 3000 metres, clocking a lifetime best of 7 minutes 50.40 seconds to just get the better of Darragh McElhinney, who set an Irish Under-23 record in second place in 7 minutes 50.80 seconds. They along with third-placed Conor Bradley and fourth-placed Hiko Tonosa all ran inside the European Indoor Championship standard.

With Sean Tobin and Brian Fay also in possession of the qualifying mark over 3000 metres, it leaves the selectors with a task of choosing the best three from five qualified athletes.

Early in the well-spaced out timetable, Leon Reid won a 200 metre battle with Marcus Lawler in a time of 20.96 seconds – the first occasion that the European 200 metre finalist from 2018 broke the 21 second barrier indoors.

Sarah Lavin ensured her place on the Irish team for the European Indoor Championships by clocking a time of 8.20 seconds in the 60 metres hurdles and following it up with 8.22 seconds in her second race over the sprint hurdles.

She already had the qualifying standard from a race in Ostrava earlier this month.

Sarah McCarthy won the Women’s 200 metres in 24.68 seconds while Ger O’Donnell posted the fastest time in the Men’s 60 metres hurdles of 7.95 seconds.

In the field, Sommer Lecky‘s clearance of 1 metre 75 was good enough to win the Women’s high jump while Ellie Hartnett won the Women’s 1500 metres.