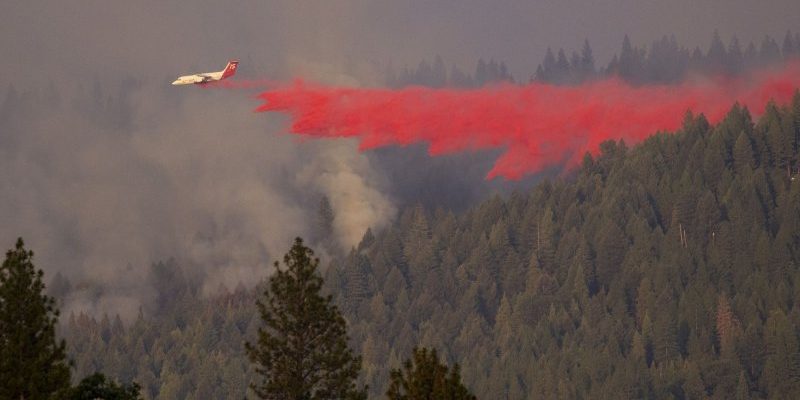 The Dixie Fire, located above the Cresta Dam in Feather River Canyon, has grown to 714,219 acres over 38 days with 35% containment, California Department of Forestry and Fire Protection said Saturday in an update. It is the second-largest fire in the state’s history.

The fire has destroyed 1,230 structures, damaged 90, and prompted evacuation orders and warnings for areas in Plumas, Lassen and Tehama counties, and evacuation warnings for areas in Butte County, the update shows. Its path of destruction includes burning through the historic mining town of Greenville, earlier this month, leveling multiple historic buildings and dozens of homes.

While the cause of the Dixie Fire sparked on July 13 is still under investigation, according to Cal Fire, Pacific Gas and Electric company may have caused it, according to a report by the utility submitted to the California Public Utilities Commission nearly a week later.

The Caldor Fire located east of Omo Ranch and south of the community of Grizzly Flats in El Dorado County, has been active for seven days and has grown to 82,444 acres with no containment, Cal Fire said Saturday in an update.

“Due to very dry receptive fuel beds, the vegetation is igniting easily throughout the fire area,” Cal Fire said in the update.

About 23,000 people have had to evacuate within six days due to the rapidly growing Caldor Fire alone, The Mercury News reported.

The fire has prompted evacuation orders, warnings in areas of El Dorado County, an evacuation warning in Amador County and closure of Highway 50, according to Cal Fire. And it has destroyed 245 structures and damaged 13 structures.

The Tahoe Daily Tribune reported that the cause is still under investigation.

The goal of the forest closures is “to better provide public and firefighter safety due to extreme fire conditions throughout Northern California, and strained firefighter resources through the country,” Cal Fire said in update.