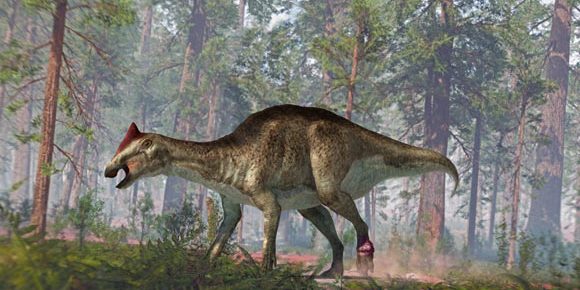 The Cretaceous-period hadrosaurid dinosaur Bonapartesaurus rionegrensis had a foot tumor and two painful fractures in the vertebrae of its tail, according to a new study.

Bonapartesaurus rionegrensis is a species of herbivorous ornithopod dinosaur in the family Hadrosauridae.

It lived in what is now Argentina during the Campanian and Maastrichtian stages of the Late Cretaceous epoch, around 70 million years ago.

Its partial skeleton was found at the site of Salitral Moreno in Argentinean Patagonia in 1984.

“The first analyses of its fossils indicated an ailment of the foot, possibly a fracture,” said Professor Penélope Cruzado-Caballero, a paleontologist at the CONICET, the National University of Río Negro, and the University of La Laguna.

“In addition to the ailment, there were other possible fractures in several neural spines of the vertebrae of the tail.”

In the new study, Professor Cruzado-Caballero and colleagues aimed to describe the injuries recorded in the skeleton of Bonapartesaurus rionegrensis.

“We were struck by the large overgrowth of bone that gave it a cauliflower-like appearance and covered almost the entire metatarsal,” Professor Cruzado-Caballero said.

“When studying the histology and CT scans of the fossil, we did not find a fracture. Instead, the indicators showed a reduction in bone density and several areas where cortical tissue had been destroyed.”

“We were probably looking at a cancer or a neoplasm, such as an osteosarcoma. The presence of diseases such as tumors confirms that they already existed at a very early age and among a very diverse group of animals.”

“Despite the large development of the cancer, it did not significantly affect the muscle insertion zone, so we cannot be sure that the lesion affected its locomotion.”

The researchers also identified two pathologies in the neural spines of vertebrae in Bonapartesaurus rionegrensis’ tail.

“One of the vertebrae had a displaced fracture that had almost healed. It was probably related to an injury resulting from a strong blow that caused the bone to be displaced and to heal in this manner, giving the spine a curved appearance,” Professor Cruzado-Caballero said.

“The other vertebra had an almost completely healed fracture also produced by a stress event, which did not lead to the displacement of the bone.”

“These fractures, especially in the case of the displaced fracture, must have been associated with infections following the rupture of the muscles surrounding the bone. They must have been painful not only because of the blow, but also because of the infections that could have impeded the mobility of the tail and caused this specimen a great deal of discomfort when it moved.”

The study was published in the journal Cretaceous Research.