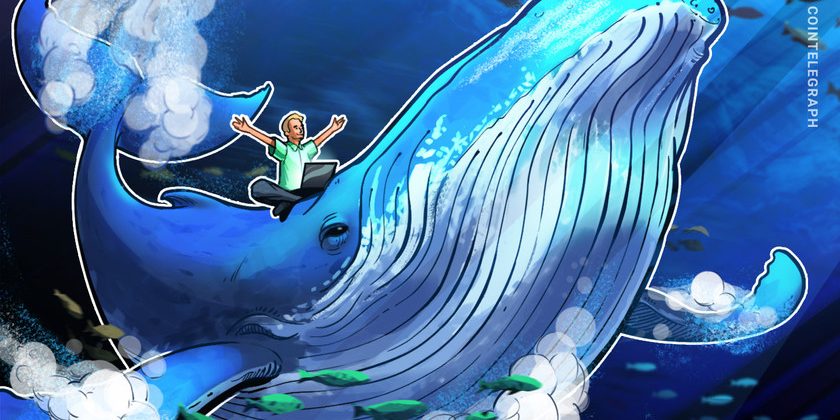 Data from Cointelegraph Markets and TradingView shows that the initial price dump that pushed BTC below the $43,000 support level on May 18 accelerated into the overnight trading session as $110 billion worth of trading volume fueled the wick down to $30,000.

The market downturn sparked outages and other delays across a few of the top cryptocurrency exchanges and the prices of a vast majority of the altcoins cratered alongside the price of Bitcoin, with Ether (ETH) price briefly plunging to $1,900 and Dogecoin (DOGE) bottoming out at $0.236.

As with any significant downturn in the crypto market, derivatives and leveraged traders have been especially hard hit by the rapid $8,000 price drop in BTC which resulted in a record 10,525 BTC being liquidated in one hour at the peak of the market squeeze.

While leveraged traders were wiped out, some well positioned traders and larger entities with dry powder used this opportunity to buy the dip and promptly put their newly acquired Bitcoins into personal wallets as evidenced by the outflow of 16,895 BTC in a span of 10 minutes during the early morning hours on Wednesday.

As for what to expect next for Bitcoin, some clues have been offered by the team at Whalemap which identified $33,000 as the new major support level for BTC with the previous support at $46,000 now becoming a major resistance level should the price try and bounce higher.

#Bitcoin supports, where are they + some analysis

1) In terms of TA, 33k looks like a support. A very similar set up can be observed at 46k which is shown below.

Previous support at 46 should also be resistance if we bounce from 33. pic.twitter.com/hdk2EHD9Me

Further analysis from the team also highlighted support levels at $37,400 and $34,200 and indicated that should the price continue to fall lower, it is crucial that the $29,000 support holds or the price could flush as low as $19,000.

While a price dip below $29,000 may seem dire to some, Whalemap instead closed their analysis by stating:

“Overall, this is a great dip buying opportunity with a clear invalidation which makes it a great risk/reward trade.”

“As goes Bitcoin, so goes the rest of the market” held true in this most recent downturn resulting in red across the board for the altcoins.

Some of the hardest-hit coins in the top 30 include Litecoin (LTC), Polkadot (DOT) and EOS which have both seen their prices fall by roughly 30% over the past 24-hours. As the market corrected, a series of price manipulations on the Binance Smart Chain-based Venus (XVS) decentralized finance platform led to a 60% drop in the price of XVS.

Out of the top 200 cryptocurrency projects, the only two that managed to put on positive gains amidst the market turmoil were Celer Network (CELR), which gained 3.33% on the day, and UNUS SED LEO (LEO), which saw its price increase by 5.25%.

The views and opinions expressed here are solely those of the author and do not necessarily reflect the views of Cointelegraph.com. Every investment and trading move involves risk, you should conduct your own research when making a decision.