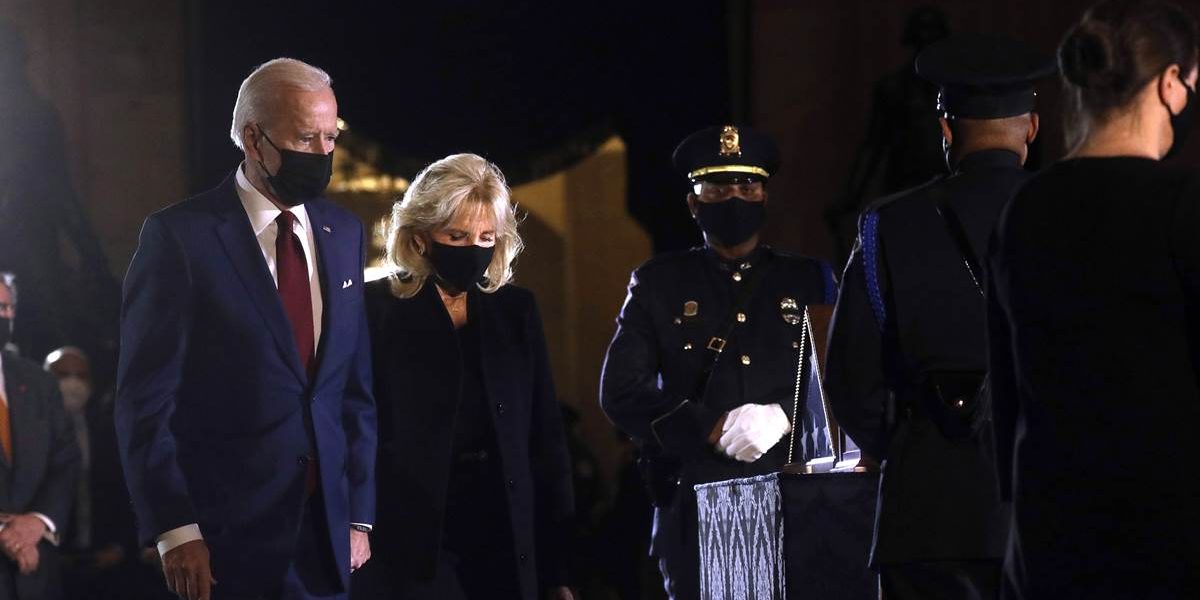 President Joe Biden paid his respect to slain Capitol Police Officer Brian Sicknick, whose remains were given the rare distinction of lying in honor at the Capitol Rotunda on Tuesday evening.

Sicknick’s cremated remains arrived on the East Front of the Capitol and placed in the Rotunda overnight to allow his colleagues and lawmakers to honor the officer.

Biden and first lady Jill Biden held their hands to their hearts and the president made the sign of the cross as they stood near Sicknick’s urn and a folded American flag.

“This flag was flown over the United States Capitol by The Honorable Nancy Pelosi, Speaker of the U.S. House of Representatives, honoring the distinguished life and service of Officer Brian D. Sicknick. January 7, 2021,” reads a plaque on the frame holding the flag.

Members of Congress will attend the viewing and pay tribute to Sicknick on Wednesday morning, with remarks from House Speaker Nancy Pelosi, D-Calif., and Senate Majority Leader Chuck Schumer, D-N.Y.

“On behalf of the House of Representatives and the Senate, it is our great privilege to pay tribute to Officer Sicknick with this lying-in-honor ceremony,” Pelosi and Schumer said in a previous statement. “May this ceremony and the knowledge that so many mourn with and pray for them be a comfort to Officer Sicknick’s family during this sad time.”

Sicknick, who was 42, died after defending the Capitol on Jan. 6 against a mob that stormed the building and tried to usurp the electoral count after then-President Donald Trump urged supporters at a rally to “fight like hell” shortly before lawmakers and former Vice President Mike Pence convened for a joint session of Congress.

Trump is set to face his second Senate impeachment trial next week on a charge of inciting the riot that left five people dead.

Sicknick, who served in the New Jersey Air National Guard before joining the Capitol Police in 2008, was injured “while physically engaging with protesters” and returned to his division office, where he collapsed, Capitol Police said in a statement. He was taken to a hospital, where he died at about 9:30 p.m. on Jan. 7.

Just four other private citizens in history have laid in honor: in 1998, two other Capitol Police officers — Jacob Joseph Chestnut and John Michael Gibson — after they were killed in the line of duty, civil rights icon Rosa Parks in 2005 and the Rev. Billy Graham in 2018.

Sicknick’s cremated remains will then be laid to rest at Arlington National Cemetery.

“The family of U.S. Capitol Police Officer Brian D. Sicknick thanks the Congressional leadership for bestowing this historic honor on our fallen American hero,” said a previous statement from Sicknick’s family released by a Capitol Police spokeswoman. “We also wish to express our appreciation to the millions of people who have offered their support and sympathies during this difficult time. Knowing our personal tragedy and loss is shared by our nation brings hope for healing.”

Dartunorro Clark is a political reporter for NBC News.