He Wanted a Unicorn. He Got… a Sustainable Business 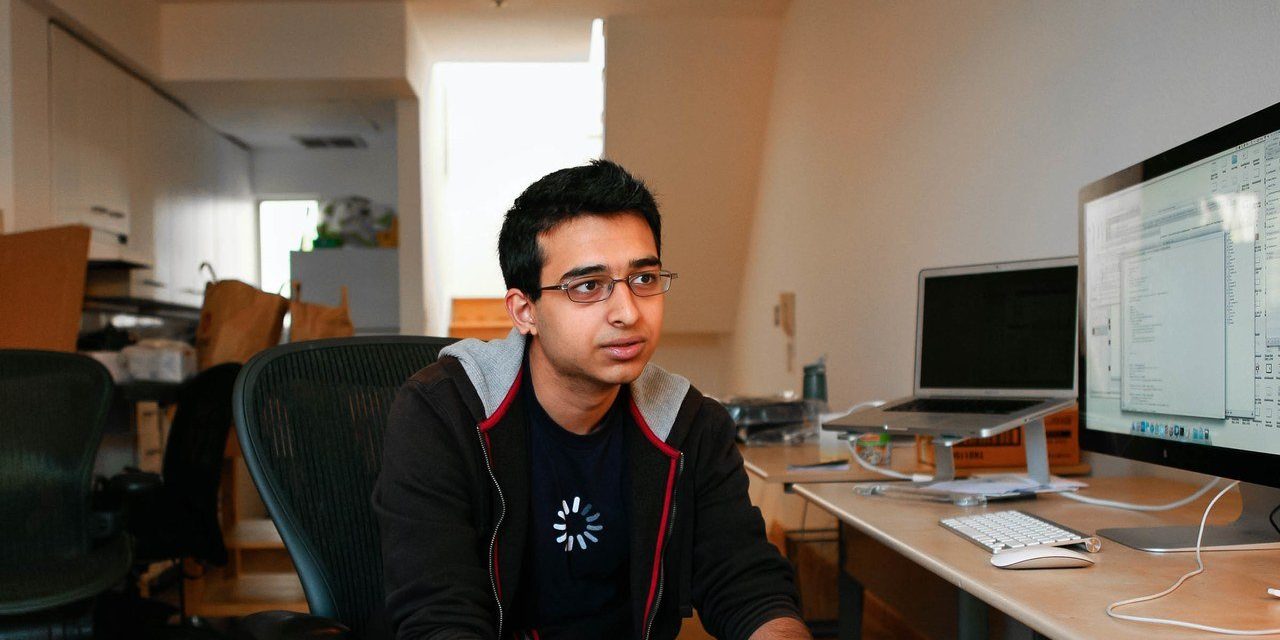 Sahil Lavingia published the first chapter of his planned book Building A Billion Dollar Company in 2012. Lavingia, who was 19 at the time, had never built a billion-dollar company. Nor would he.

The title was aspirational, but at the time the goal didn’t seem out of reach. His e-commerce startup Gumroad raised a $7 million of funding led by venture capital firm Kleiner Perkins. “I think I had a bit of an ego problem,” Lavingia, now 27, admits. “Hopefully I was realistic about my chances. My thinking was that if it worked, I wanted to have it documented.”

It didn’t work out the way Lavingia or the VCs hoped. The company, a tool creators can use to sell digital products like ebooks and illustrations, saw one year of 10-fold growth, but by 2014 had settled into a much slower rate. He says the company is now growing at a rate of around 40 percent per year and made $5 million revenue and a net profit of $195,554 last year. That’s not bad, but it’s not keeping Jeff Bezos up at night.

In Silicon Valley, merely being sustainable is considered failure. Paul Graham, the founder of the startup incubator Y Combinator, once wrote that the difference between a startup and a small business is that startups are companies designed to grow into big companies and to do it quickly.

Because most startups fail, venture capital firms rely on investments that go public or sell for at least a billion. Karan Mehandru, a partner at the venture capital firm Trinity Ventures, says even smaller firms like his encourage entrepreneurs to aim for billion-dollar payouts.

Lavingia’s story is one part cautionary tale for entrepreneurs seduced by the allure of venture capital and billion dollar valuations, and one part an example of how a company can thrive outside those expectations.

Many startup founders, particularly those like Lavingia who specifically aspired to build a billion-dollar company, sell or shutter their startups and move on to their next big idea once they realize their company will never be what Silicon Valley venture capitalists want them to be. But Lavingia is still at the helm of Gumroad, proving that sometimes it’s better to see an idea through, even if it isn’t a billion dollar idea.

Lavingia learned to program in high school and moved to the US in 2009 to study computer science at the University of Southern California. In his spare time, he built mobile apps for companies like Pinterest and the music streaming startup Turntable. That work landed him a job at Pinterest just as the company was attracting mainstream attention.

One Friday in the spring of 2011, Lavingia designed an icon for a mobile app that he never ended up building. He decided to sell the design, but he wasn’t sure how best to market the digital file. There were a variety of free, open source shopping cart systems he could set up, but that seemed like a lot of trouble to go through to sell a single item. Sites like eBay and Etsy were geared towards selling physical goods. What he really wanted was something like the Apple App Store, but for any type of content—a site where he could upload the file he wanted to sell, set the price, share a link to the product on social media, and let someone else handle credit card processing. He realized that there were other people who wanted the same thing. So he spent the rest of the weekend cobbling together the first version of Gumroad and posted a link to programmer hangout Hacker News.

Lavingia was right: Thousands of people wanted a service like Gumroad, and they flocked to the site to sell games, ebooks, fonts, stock art, podcasts, and other digital products. Some even sold physical products like zines.

Lavingia says investors contacted him right away, including Craig Shapiro of the Collaborative Fund, and Turntable founder Seth Goldstein. Part of the appeal to investors was Lavingia himself. Goldstein had worked with him on the Turntable app and came away impressed. “This kid had some strong technical skills, but seemed kind, empathic, wise,” Goldstein says. “You know, both right-brained and left-brained.”

Goldstein also thought Gumroad had real potential. There were few ways for creators to sell digital content online in 2011. Patreon wasn’t around yet. Payment processing startup Stripe was still in beta, and it wasn’t easy to process payments. There were specialized sites, like Bandcamp for music, but Goldstein saw an opening for a general purpose marketplace. “It seemed to me that Sahil could build a really seamless big business,” he says.

By the end of the year Lavingia had quit his job without vesting his shares in Pinterest, meaning he didn’t get a payout when the company went public last year. He raised $1.1 million in early funding for Gumroad from Goldstein, the Collaborative Fund, PayPal co-founder Max Levchin, and others. The next year, the company landed the $7 million round of funding led by Kleiner Perkins.

Users found Gumroad valuable. In addition to handling credit card payments, the company collects sales tax and handles customer support. Gumroad charges 25 cents plus 10 percent of each product sale, and sends the seller a check with the proceeds once a month.

Adam Wathan makes a living selling computer programming courses. After trying to offer his products with custom software on his own website, he turned to Gumroad. The site’s fee cut into his revenues, but he soon decided the service was worth the price. “Gumroad acts as the merchant of record,” he explains. “When someone buys the product, they’re buying from Gumroad, not me.”

The company grew rapidly, largely by word of mouth (Wathan started using Gumroad because he’d purchased products through it himself), and it fostered certain niches. Max Ulichney is an artist who sells custom brushes on Gumroad for the digital illustration application Procreate. “Gumroad has always felt like a place for brushes,” says Ulichney. “It felt like the natural place to go when I was ready to sell my own.”

Things went well for the first couple of years. “We had one year of 10-fold growth,” Lavingia says. “We were growing like crazy and thought it would be like that every year.”

But then the growth stalled out in 2014. It turns out that the selling digital products just wasn’t as big a market as Lavingia thought it might be. “I thought that was OK, it was just going to take longer to get to the size we wanted,” he says.

Investors were less optimistic. They wanted to see 20 percent growth per month, he says. Lavingia realized he was in trouble when he started discussing another round of funding. “I very quickly realized that VCs were not super bullish on the company,” he says. “That was a surprise to me, but it shouldn’t have been. That’s when I realized I had to start thinking about layoffs.”

His investors told him he should simply shutter the company. “They said ‘your time is worth more than this, shut it down, start again, we’ll give you more money to do that,'” Lavingia tells WIRED.

But, Lavingia says, he felt a responsibility to the sellers on Gumroad. “We were processing $2.5 million every month,” he says. “Creators relied on that for rent, student loans, mortgage. It seemed wrong to tell thousands of people ‘hey, because I want to try something else, you’re going to lose this monthly check that you’re using to pay your rent.'”

Selling the company would have been almost as bad. In many cases, companies buy other companies for their engineering talent, not their products or customers, a practice known as an “acquihire.” Selling out might’ve helped Lavingia and his investors save face, but he felt like it would have been abandoning Gumroad’s customers.

Instead, Lavingia chose to try for sustainability, not VC-style growth. He laid off all but five employees in 2015, and by mid-2016, the company was a one-man operation. Gumroad was earning a modest profit, and Lavingia was able to live off the business. But he felt like a failure. In Silicon Valley, a business that merely pays the founder’s bills is derided as a “lifestyle business.” For a while after the layoffs, he’d hoped to get the company back on the path to more VC funding and hypergrowth, but eventually he had to admit that Gumroad would never be a billion dollar company.

In 2016, realizing he could run Gumroad from anywhere, Lavingia left the Bay Area for Provo, Utah, and now lives in Portland, Oregon. The distance from Silicon Valley, he says, has given him a new perspective on business.

Where before, his goal was getting to a billion dollars, he found other ways to measure success, like the millions of dollars he says the company has paid out to creators. He’s built the Gumroad team back up to 15 people, including part-time employees, but hopes to keep the company small and sustainable.

He never wrote more than a few chapters of Building a Billion Dollar Company. But he’s returned to the essential idea of documenting the nuts and bolts of building and running a company. Last year, he live streamed a board meeting, giving budding entrepreneurs a chance to see how he runs a board meeting. Around 100 people tuned in and another 4,000 watched it later. And he published a 3,000 word piece on Medium detailing his Gumroad experience.

Lavingia realizes that other entrepreneurs who took venture capital investments can’t necessarily follow the same path he did. Gumroad’s largest investors sold their shares back to Lavingia for $1 because they didn’t want to deal with appointing board members any longer, and it worked out better on their taxes.

The best thing to do would probably have been never to have taken venture capital to begin with. “Ninety-five percent of companies don’t and shouldn’t take venture capital, given the outcomes of most small businesses,” says Mehandru, of Trinity Ventures. “But once you get on that treadmill, it’s hard to get off if you want to build a large company.”

A Cruise Ship Quarantine, a Hunt for Cheaters, and More Car News This Week
February 24, 2020

A Star’s Auroras Light the Way to a New Exoplanet
February 24, 2020